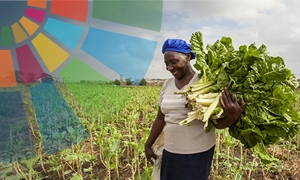 Food systems at the global level and in many countries and regions are still failing to end hunger and malnutrition. With COVID-19 disproportionately impacting poor and food-insecure populations, levels of undernourishment continue to rise. Many food systems are based on production and distribution systems that are not sustainable. Poverty and inequalities between and within countries are widespread in agriculture and food systems, while climate change and environmental degradation impact both food systems and people. The fundamental human rights—including the right to food, the right to health, the right to education, the right to decent jobs, and the right to safe water and sanitation—are often violated. The UN Food Systems Summit (UNFSS) offers a historic opportunity to address these problems.

The transformational roles of science must be recognized among the emerging actions proposed for the UN Food Systems Summit. Actually the critical role of science—social science and natural sciences—is increasingly noted by Summit stakeholders. This was evident in consultations of the Scientific Group for the Summit with the G20 Meeting of Agricultural Chief Scientists (G20-MACS) this week under the Italian government’s Presidency. Science and innovation are essential to accelerate the transformation to better food systems. A better food system is more efficient and sustainable, protecting its most vulnerable members. Thus, investments in science- and technology-based innovations must be accompanied by institutional and policy innovations and societal dialogues to enable full inclusion of poor and marginalized populations, including smallholder communities.