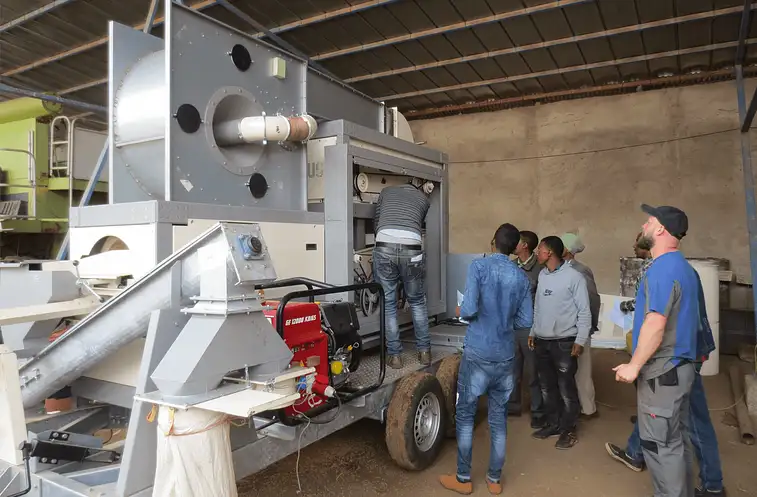 It’s a familiar problem in international agricultural development–a project with external funding and support has achieved impressive early results, but the money is running out, the time is growing short, and there’s not a clear plan in place to continue and extend the program’s success.

Over the past seven years, the German development agency Deutsche Gesellschaft für Internationale Zusammenarbeit (GIZ) established Green Innovation Centers in 13 countries in Africa and two in Asia, partnering with the International Maize and Wheat Improvement Center (CIMMYT) to support projects that introduce mechanization in a way that improves long-term food security and prompts economic growth. Now, as the project enters its final two years of funding, GIZ and CIMMYT are focused on ensuring the gains produced by the Green Innovation Centers are not lost.

Like any complex challenge, there’s not just one solution to the sustainability problem–but CIMMYT is working to address a massive question around why pilots fail in agricultural development by implementing a systematic approach to scalability that recognizes the critical importance of context and puts projects on a sustainable path before the money is gone.

The Scaling Scan is a practical tool that helps users set a defined growth ambition, analyze their readiness to scale using ten core ingredients, and identify specific areas that need attention in order to reach the scaling ambition.

The GIZ staff learned to use the Scaling Scan by applying it to early stage innovations in their home countries ranging from commercial fodder production in the Southern Province of Zambia to seed value chains in the Oromia and Amhara regions of Ethiopia.

What will scale up in Ethiopia?

In Ethiopia, smallholding farmers producing legumes, wheat, and maize struggle to increase their yield to a level that can improve food security, generate higher incomes for producers and their families, and promote economic growth and jobs in agricultural communities. To help smallholders develop sustainable solutions, GIZ senior advisor Molla Dessalegn worked with his Green Innovation Center team to brainstorm and launch a range of 20 proposed innovations–from risk mitigation and new contract structures to introduction of new technology–all with the aim of improving agricultural yields.

To date, these innovations have introduced over 200,000 Ethiopian smallholders to new knowledge and practices to improve their output. But with the project exit bearing down, Molla and his team were eager to identify which innovations held the most promise for survival and growth beyond the endpoint. So they put their pilot projects to the test using the Scaling Scan.

The scan involves an intensive, day-long seminar originally designed for in-person delivery, but remote versions have also proved successful as COVID limited global travel. The scan focuses on thorough analysis and scoring of the current state of a pilot project and its potential for growth given the realities of conditions on the ground.

Facilitators lead project managers through evaluation of the ten ingredients required for successful scaling, from finance and collaboration to technology, know-how, and public sector governance. The outcome is a clear data set assessing the scalability of the pilot and directing attention to specific areas where improvement is needed before a project can expect serious growth.

What emerged from the scan surprised Molla. Some of the strategies he saw as most successful in the early stages–such as a contract farming program–scored poorly, whereas the scan identified deployment of mobile seed cleaners as a solution that held particular promise for scalability. These outcomes prompted the team to refocus efforts on this strategy.

About 95 percent of Ethiopian smallholders rely on informal seed systems, either saving and reusing seed or exchanging low quality seed with other farmers. Seed cleaning plays a critical role in helping farmers build a high quality, high yield seed development system. Molla and his team had already worked with smallholder cooperatives in Oromia to distribute three mobile seed cleaners, and they knew these machines were being heavily relied upon by farmers in this region.

The Scaling Scan showed them, among other things, that the successful adoption of the seed cleaners had even more potential–it was an innovation that could be sustained and even expanded by local stakeholders, including the Ministry of Agriculture.

This result prompted Molla to recommend investment in additional mobile seed cleaners–four to serve cooperatives in the Amhara region and a fifth for the West Arsi district in Oromia. These machines are now in operation and helping additional smallholders improve the quality of their seed stock. This initial expansion confirms the Scaling Scan results–and CIMMYT plans to continue supporting this growth with the purchase of another round of seed cleaners.

The Scaling Scan also identified problems with the business model for sustaining the mobile seed cleaners through cooperatives in Ethiopia, and this outcome directed the Green Innovation Centers to partner with a consultant to develop improvements in this area. In this way, one of the most important values of the scan is its ability to guide decision-making.

Scaling up the future

Seed cleaners alone won’t solve every yield problem for Ethiopian farmers, but the scan has now guided the initial implementation–and contextual adaptation–of a new form of agricultural mechanization across two regions of the country, with the promise of more to come.

And there’s more to come from the Scaling Scan as well.

Now that he’s received certification as a trainer, Molla plans to help farmers, officials, and other development workers adopt this rigorous approach to evaluating innovations that show potential. When funding for his project ends in 2024, he will be leaving 300,000 smallholders in Ethiopia with more than machines–he will be leaving them with the knowledge, experience, and practices to make the most of the technological solutions that are improving their yields today and building a more secure future for their communities.