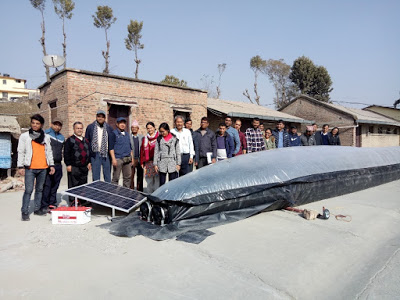 Spring rice contributes around 20 percent of the total rice production in Nepal. However, farmers may lose 10 to 30 percent of the rice produced when they are not able to dry it properly. Paddy drying is a big problem during the onset of the rainy season in the country and there is great potential for technology that could significantly boost its rice production, contribute to national and local self-sufficiency, and add revenues for farmers.

The collaboration between International Rice Research Institute (IRRI) and Renewable Energy for Rural Areas (RERA) programme in Nepal was initiated to provide farmers with the tools to effectively dry rice during the spring. It is a project born through the partnership of the Government of Nepal and the Government of Germany to support the decentralized renewable energy sector in Nepal. It is jointly implemented by the Alternative Energy Promotion Centre (AEPC) and Deutsche Gesellschaft für Internationale Zusammenarbeit (GIZ) GmbH on behalf of the German Federal Ministry for Economic Cooperation and Development (BMZ). Amongst other measures, the RERA programme is supporting the development and deployment of new and innovative renewable energy technologies (RETs) in the agriculture sector to increase productivity, generate income and stimulate low carbon economic growth.

In a postharvest situation assessment of spring rice, Martin Gummert, head of IRRI’s mechanization and postharvest cluster, suggested the use of a Solar Bubble Dryer (SBD). This is a low-cost drying technology option for solving the drying problems by providing a simple and flexible alternative to sun drying that offers protection of the grains from rain. It is also a climate smart technology as it does not require an external energy source.

The SBD was developed with funding from BMZ through a consortium between IRRI, GrainPro, Inc. Philippines, and the University of Hohenheim, Germany. It is the latest low-cost drying technology that uses energy from the sun in two ways: (1) the drying tunnel collects and converts the sun’s rays into heat, to increase air temperature of the air for faster drying and (2) the photovoltaic system with solar panel for generating electricity and a deep cycle battery to run the blowers and inflate the plastic tunnel by blowing air through it and at the same time drives moisture out of the tunnel.

As a part of the piloting strategy of this technology, a three-day training and demonstration of the SDB was conducted at the station of Nepal Agricultural Research Council in Khumaltar, Lalitpur District, Nepal. Participants were government institutions, researchers, extension agents, members of NGOs or of the private sector. The trainees actively participated in the discussion and hands-on exercises in the setting-up, operating, and troubleshooting the SBD. In addition, they were also presented with the basic principles on drying to further strengthen the participants’ technical knowledge. There were also discussions on developing a business model for a drying service provision as a way forward to disseminate and promote adoption of the technology for farmers and end-users in the villages.

In his remarks at the opening ceremony, the Secretary of the Ministry of Agricultural Development, Dr. Suroj Pokhrel said, “I am very pleased to know that RERA has generously supported the purchase of SBD for the purpose of piloting and training.” He was also very happy to know that IRRI and GrainPro, Inc. have jointly developed the solar bubble dryer.

The Executive Director of National Agricultural Research Council (NARC), Dr. Tek B. Gurung cited in his message that farmers face a big problem on drying especially when the monsoon season starts. “As I see it, the SBD is not so expensive because it utilizes the solar energy and farmers can maximize the use of this technology.”

Mr. Christian Liedtke, Chief Technical Advisor of RERA programme in Nepal, strongly values the partnership with IRRI. He said, “today is a kick start for a small initiative to introduce this new technology – a training of trainers to pilot test the SBD which is an important step. If the pilot is successful, then we can roll it out big in Nepal and improve the productivity of Nepal and become less dependent on imports.”

Mr. Nawa Raj Dhakal, Director of the Alternative Energy Promotion Center (AEPC), highlighted that AEPC is a nodal agency for promoting renewable energy technologies in Nepal. He said “AEPC will be happy to integrate the SBD technology in its regular activities to accelerate the deployment of this technology if the piloting is successful”.
A follow-up activity will be conducted by staff of the Agricultural Engineering Division (AED) of NARC to re-echo the training and demonstration by drying paddy with farmers and seed growers in Kailali and Khanchanpur districts on February 2018.

The training program was held last January 22-24 and was facilitated by IRRI Postharvest engineers Suryakanta Khandai (India) and Carlito Balingbing (Philippines). The activity was organized by IRRI Nepal and RERA programme with the coordination of Dr. Bhaba Thripathi, Senior Associate Scientist and Ms. Surakchya Rayamajhi of IRRI Nepal and Mr. Bikash Uprety of RERA.