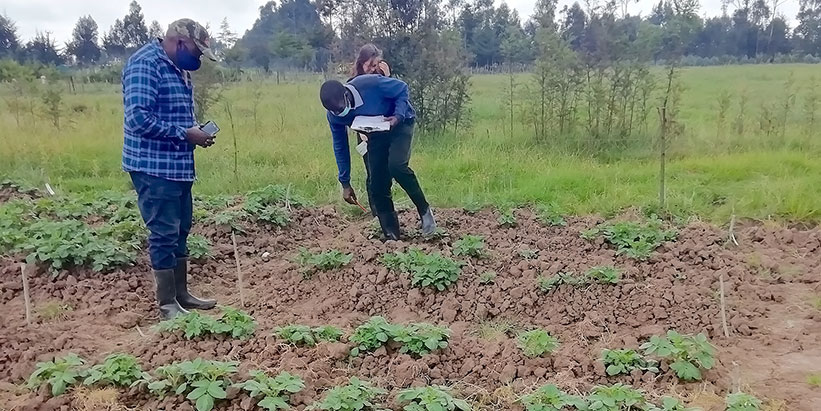 Scientists at CGIAR-IITA, working with the International Centre of Insect Physiology and Ecology (icipe) under the joint Nematology Unit, NemAfrica, housed at icipe’s campus in Nairobi, and their national and international partners, have been at the forefront of efforts to address a new emerging pest threat to the production of potato in the East Africa region, and in many other countries in the world. These are the parasitic microscopic worms known as Potato Cyst Nematodes (PCN). These destructive pests attack potato roots and can cause yield losses of up to 80%, and in some instances, even total crop failure.

PCN consist mostly of two species, Globodera rostochiensis and Globodera pallida, both of which have recently been discovered attacking potato in Kenya. G. rostochiensis however, has since been shown to be widespread across Kenya and has additionally been detected further afield in Uganda and Rwanda.

“PCNs are among the most destructive potato pests globally. They are particularly lethal because each female nematode produces hundreds of eggs­­—between 300 and 500, which remain protected in a cyst formed by their body after they die. These cysts can remain dormant in the soil for years, awaiting the next potato crop host. Because of the dangers they pose, PCNs have been designated as quarantine pests in many countries, to strictly control their spread,” says Danny Coyne, a leading nematologist and Soil Health Scientist at IITA.