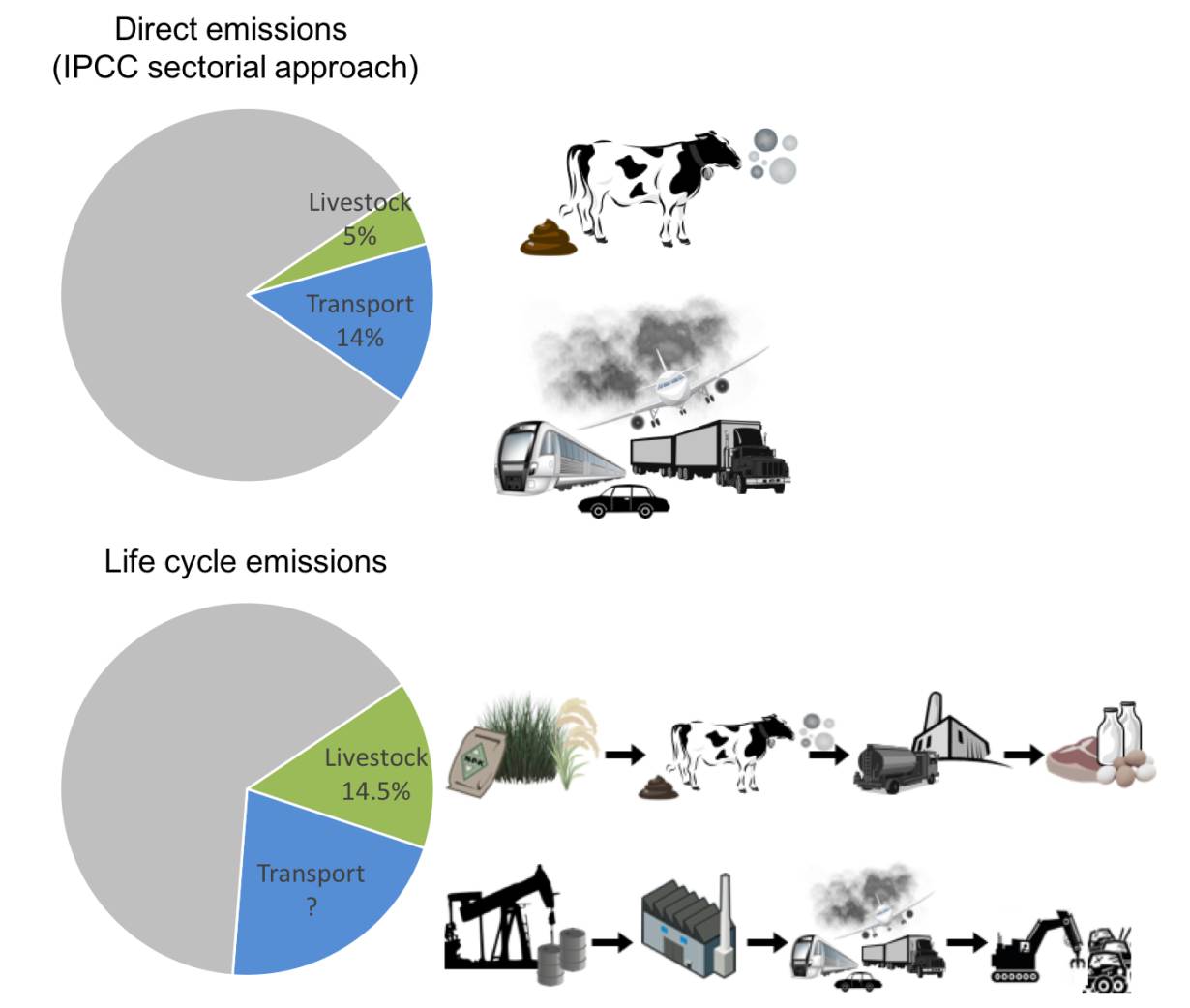 Livestock experts Anne Mottet and Henning Steinfeld, of the Food and Agriculture Organization of the United Nations (FAO), warn of the pitfalls of simplification when looking at greenhouse gas emissions from livestock. . . .

[G]reenhouse gas emissions from livestock and transport are often compared, but in a flawed way.

‘Using a global life cycle approach, FAO estimated all direct and indirect emissions from livestock (cattle, buffaloes, goat, sheep, pigs and poultry) at 7.1 gigatons of CO2 equivalent per year, or 14.5% of all anthropogenic emissions reported by the IPCC. In addition to rumen digestion and manure, life cycle emissions also include those from producing feed and forages, which the IPCC reports under crops and forestry, and those from processing and transporting meat, milk and eggs, which the IPCC reports under industry and transport.

Hence, we cannot compare the transport sector’s 14% as calculated by the IPCC, to the 14.5% of livestock using the life cycle approach.

‘Though it is the most systematic and comprehensive method for assessing environmental impacts according to the IPCC, there is no life cycle approach estimate available for the transport sector at a global level to our knowledge. Non-availability, uncertainty or variability of data limit its application. But several studies, including some reported by the IPCC, show that transport emissions increase significantly when considering the entire life cycle of fuel and vehicles, including emissions from extracting fuel and disposing of old vehicles. For example in the US, greenhouse gas emissions for the life cycle of passenger transport would be about 1.5 times higher than the operational ones.

‘Comparing transport and livestock raises another issue. Wealthy consumers, in both high and low income countries, who are rightly concerned about their individual carbon footprint, have options like driving less or choosing low carbon food. However, more than 820 million people are suffering from hunger and even more from nutrient deficiencies. Meat, milk and eggs are much sought after to address malnutrition. Out of the 767 million people living in extreme poverty, about half of them are pastoralists, smallholders or workers relying on livestock for food and livelihoods.

The flawed comparison and negative press about livestock may influence development plans and investments and further increase their food insecurity.

‘. . . The world needs both consumers that are aware of their food choices and producers and companies that engage in low carbon development. In that process, livestock can indeed make a large contribution to climate change mitigation, food security and sustainable development in general.’