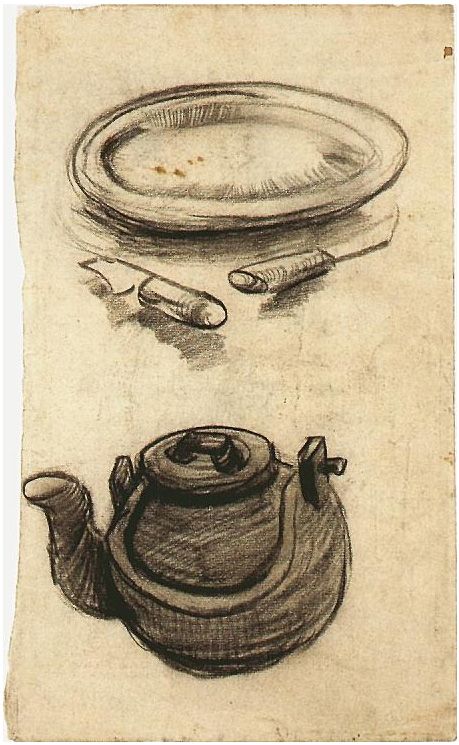 Plate with Cutlery and a Kettle, by Vincent van Gogh.

‘On September 23, the Bill & Melinda Gates Foundation, the World Bank, the United Kingdom, the Netherlands, the European Commission, Switzerland, Sweden and Germany announced commitments of more than US $790 million to address the impact of climate change on food and agriculture. These commitments followed a recent call by the Global Commission on Adaptation, led by Ban Ki Moon, Bill Gates, and Kristalina Georgieva, for increased resource allocations to international agricultural research.

Specifically, the Commission called for a doubling of investments in the CGIAR, the organization best known for fostering Asia’s green revolution.

‘These calls and commitments recognize the scale, context, and location of the challenges confronting the global food system. And, they recognize the CGIAR’s reach and effectiveness.

The best available estimates indicate that doubling the CGIAR budget, by itself, goes half way to offsetting the implications of climate change for global hunger by 2050, alongside generating a multiplicity of other human and environmental benefits.

‘Over the next 40 years, production of calories globally must increase by about 50% in order to keep up with food demand. This massive growth in food production must occur in a context of climate change. Depending substantially on the global mitigation regime pursued, global average temperature will rise by a minimum of about 0.5 degrees to more than one degree Celsius by 2060. These temperature increases come on top of the one degree increase experienced since the dawn of the industrial revolution 150 years ago, pushing natural systems (including food systems) further away from equilibria established over millennia.

‘On top of this, food systems must also play a prominent role in mitigation efforts if a stable climate is to be achieved. This implies, among many other items, limited or negative net expansion of land area under crops and pasture.

‘Finally, growth in food demand over the next 40 years will concentrate in Africa and South Asia. While food trade will play an important role in meeting demand, it is desirable from both developmental and environmental perspectives that the bulk of the necessary increase in food production occur in these regions. The alternatives are large additional food imports into Africa and/or South Asia; greater production pressure in surplus regions, such as the United States and Brazil (likely with negative environmental implications such as greater pressure for deforestation of the Amazon); dimming of development prospects in those countries with relatively stagnant agriculture/food sectors; and greater outward migration pressure from these same countries in response to climate or other shocks.

Cow with vegetables and corn, by Vicki Sawyer.

‘CGIAR work focuses on Africa and South Asia, exactly where most incremental food demand is expected to materialize and where production increments should most logically occur. With a budget of not quite one billion US dollars, the CGIAR already operates at reasonable scale.

This means that one dollar invested in agricultural research for developing countries yields multiple dollars in benefits, with the bulk of those benefits accruing to poor people. . . .

Let’s take on board the recommendations of the Global Commission on Adaptation, including scaling up the CGIAR, to meet 21st century challenges starting now.

Channing Arndt is director, Environment and Production Technology division, and Shenggen Fan is director general at the International Food Policy Research Institute. Nick Austin is director, Agricultural Development, within the Global Development division at the Bill and Melinda Gates Foundation.