CGIAR Borlaug Dialogue 2022 side event: Egypt’s COP27 plans and the role of CGIAR 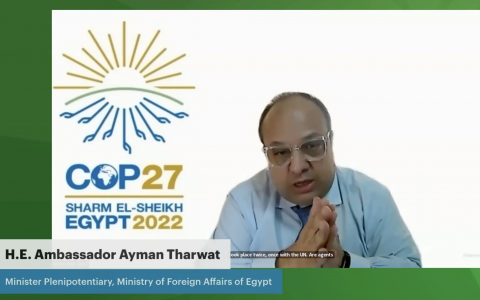 One of the several side-events CGIAR organized as part of this year’s World Food Prize Borlaug Dialogue was dedicated to Egypt’s plans for growing the climate resilience of agriculture and food systems in its role as host and presidency of the UN climate talks in Sharm El-Sheikh (COP27, Nov. 6-18), as well as the role CGIAR is playing in them. The Oct. 20 virtual seminar, convened by IFPRI, the International Center for Agricultural Research in the Dry Areas (ICARDA), and CGIAR’s National Policies and Strategies Initiative, examined the climate change challenges Egypt’s agrifood sector is facing and how the focus on climate c in the new CGIAR research portfolio can help increase climate resilience in Egypt and beyond.

In his opening remarks, Michael Baum, Deputy Director General, ICARDA, gave an overview of the new CGIAR research initiatives on climate change, as well as CGIAR’s active role in and plans for COP27, including the official Food and Agriculture Pavilion hosted by the United Nations Food and Agriculture Organization (FAO), CGIAR, and The Rockefeller Foundation. Baum also spoke about direct engagement of CGIAR with the Egyptian COP27 Presidency.