Tropical Forages and the Diffusion of Brachiaria Cultivars in Latin America 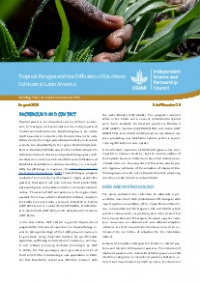 Tropical pastures are important sources of food, income, and, increasingly, environmental services in many parts of Central and South America. Brachiaria grasses are native to Africa and were introduced to the Americas in the early 1950s due to their high potential productivity in livestock systems and adaptability to the region. Brachiaria decumbens cv. Basilisk (CIAT 606) was the first cultivar adopted in Latin America and remains an important forage grass cultivar. However, early research identified some limitations of Brachiaria decumbens in various countries, i.e., susceptibility to spittlebugs. In response, the International Center for Tropical Agriculture’s ( CIAT) tropical forages program evaluated and selected well-adapted, highly-productive pastures that would not only increase farm productivity but also improve soil quality and other environmental outcomes.

A considerable expansion of Brachiaria grasses has been reported in various countries, but the documentation of their uptake has been limited and has relied mainly on anecdotal
evidence. One objective of this study was to provide rigorous estimates of the adoption of improved Brachiaria grasses at scale in key tropical livestock producing countries in Latin America, outside Brazil.