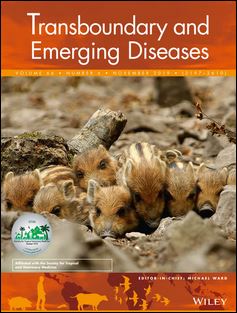 In Vietnam, Foot‐and‐mouth disease (FMD) is endemic, but no nationwide studies have been conducted to assess the monthly variations and space‐time clusters of FMD. The main objective was to identify the temporal patterns and space‐time clusters of FMD from 2007 to 2017 using national surveillance data in Vietnam. A total of 163,733 cases were reported from 2007 to 2017. Among them, the proportion of buffaloes (43.31% of total reported cases; 70,909 cases) was highest followed by cattle (30.11%; 49,306 cases), pigs (26.67%; 43,662 cases) and sheep/goats (0.41%; 675 cases). The serotype O was widely distributed across the country while serotype A was observed in Northeast, Central and Southern part of Vietnam while Asia 1 has been not identified since 2007. For monthly variations, most cases were observed during the dry season (from November to March) except Central Highlands. Under the spatial window was set at 50%, a total of seven clusters were identified. The primary cluster was observed from Dec 2009 to Dec 2010 in the northwest (radius: 101.67 km), showing a ratio of 3.75. The secondary cluster was detected in the northeast region (radius: 76.54 km) with a ratio of 3.53 in Feb 2017. The 3rd cluster was the largest with a radius of 176.69 km and located in the southern part of Vietnam. Interestingly, the most temporal clusters included between December and March during the study period. Our findings provide better insight into the temporal patterns and distribution of clusters of FMD in Vietnam. This study provides useful information to policymakers on the hotspot areas and timing of outbreaks. It also identifies when and where national surveillance and control programmes could be implemented more efficiently for the prevention and control of FMD.