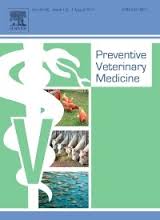 Pigs in Lao People’s Democratic Republic are important for income and food security, particularly in rural households. The majority of pigs are reared in smallholder systems, which may challenge the implementation of any disease control strategies. To investigate risk factors for pig production diseases in such farming systems in the country a serological survey was conducted during 2011. A total of 647 pigs were sampled, accounting for 294 households in Luang Prabang and 353 in Savannakhet province representing upland and lowland, respectively. The results demonstrated that pigs in Lao PDR had antibodies against erysipelas (45.2%), CSF (11.2%), PRRS (8.6%), FMD O (17.2%) and FMD Asia 1, (3.5%). Differences in the housing systems influenced disease risk, for example, penned pigs had reduced odds of FMD and CSF, compared to those in scavenger systems. Pigs owned by farms using a sanaam (a communal area where pigs are kept for some time of the year) had 3.93 (95% confidence interval (CI): 1.09–14.7) times the odds of having pigs seropositive for FMD. Farms on which sudden piglet deaths had been experienced were more likely to have pigs seropositive for FMD O and erysipelas. These diseases constrain the development of village farming and the wider livestock industry due to their impact on productivity and trade. Vaccination coverage for FMD and CSF was low and there was a lack of national funding for livestock disease control at the time of the study. Further investigation into sustainable low-cost control strategies for these pathogens is warranted.