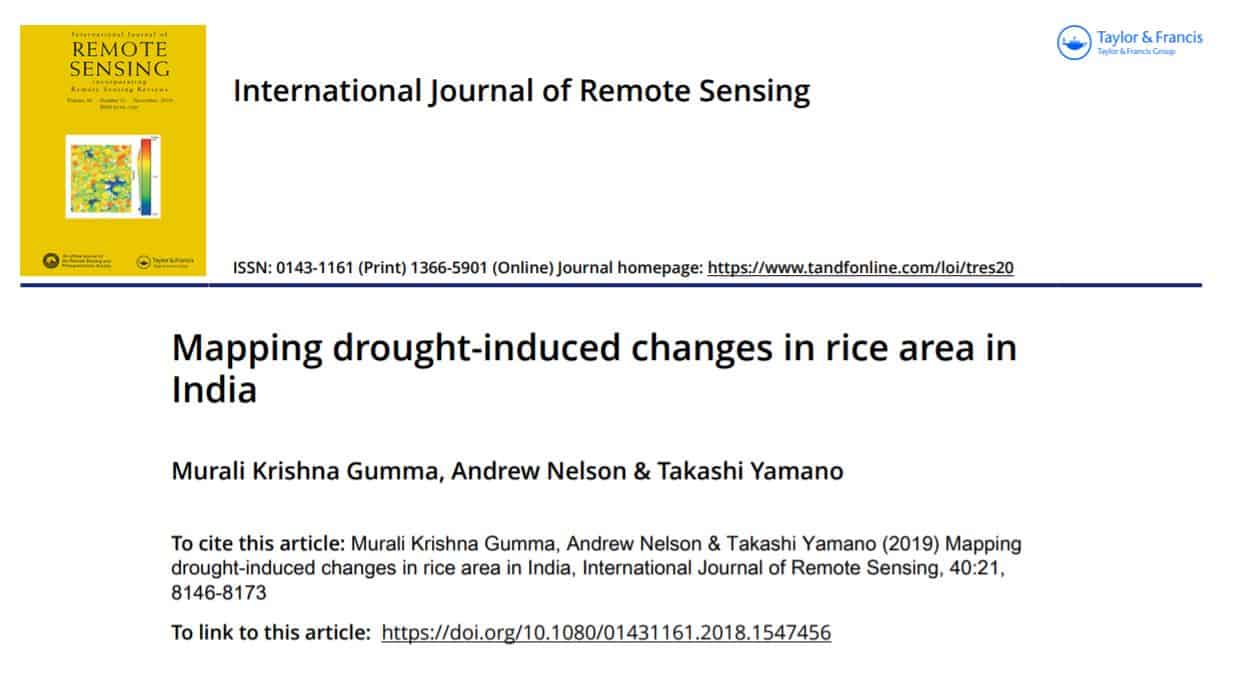 Rice is a staple food crop of India and is grown on 44 Mha (2011–12), 58.6% of which are irrigated. An inevitable phenomenon which looms over all aspects of human life and affects rice production in India is drought. Assessing drought damage using geospatial datasets available in the public domain, such as the Normalized Difference Vegetation Index (NDVI) derived from the Moderate Resolution Imaging Spectroradiometer (MODIS), can provide specific and local ecoregion information for developing drought-resistant rice varieties. Based on multi-temporal NDVI data and field observations in 2009, we developed a methodology to identify and map drought-affected areas in India. A long-term (10-year) average of NDVI during the rainy (kharif) season (June–October) was compared with NDVI from a known drought year (2002–03) to identify changes in rice area. Rainfall data from the Tropical Rainfall Monitoring Mission (TRMM) was used to support the drought analysis. Spectral matching techniques were used to categorise the drought-affected rice areas into three classes – severe, moderate, and mild based on the intensity of damage assessed through field sampling. Based on these ground survey samples, spectral signatures were generated. It was found that the rice area was about 16% less in the drought year (2002–03) than in a normal year (2000–01). A comparison of the MODIS-derived rice area affected by drought in 2002 for each state and district against the difference in the kharif season harvested rice area between 2000 and 2002 (from official statistics) revealed a substantial difference in harvested area in 2002 that was largely attributable to drought. An 84.7% correlation was found between the MODIS-derived drought-affected area in 2002 and the reduction in harvested area from 2000–01 to 2002–03. Good spatial correlation was found between the drought-affected rice areas and reduction of rice harvested areas in different rice ecologies, indicating the usefulness of such geospatial datasets in assessing abiotic stress such as drought and its consequences.