Evaluation of 10 genotypes of sweetpotato for fries. 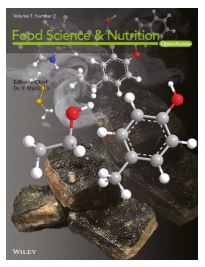 Evaluation of 10 genotypes of sweetpotato for fries.
Laryea, D.; Koomson, D.; Oduro, I.; Carey, E.
The potential use of selected genotypes of sweetpotato for fries was evaluated. Moisture, fat, browning index, and beta-carotene content of fries from 10 sweetpotato genotypes, Apomuden, Bohye, Nanungungu, Otoo, CIP442162, Patron, CIP440390, Obare, Dadanyuie, and Tu-Purple, were determined by standard methods. Sensorial properties of the fries were further evaluated by an in-house trained panel of eight members using standard methods. Fat content was highest in C1P442162 and low in Dadanyuie, while beta-carotene content decreased by 44.27% in Bohye and 13.20% in Nanungungu after frying. Browning index was highest in the orange-fleshed and purple genotypes, but this was mostly due to their flesh colors and not the frying conditions. Fries from orange-fleshed genotypes, Apomuden and Nanungungu, were considered to be sweeter than the other genotypes. Detection of caramel and starch (rawness sensation) was very low for all genotypes assessed. Oily mouthcoat, moistness, and sogginess were detected in mostly the orange-fleshed genotypes, particularly Apomuden and Nanungungu. Tu-Purple, Bohye, and CIP440390 produced moderately crunchy fries and had the highest score for desirable attributes compared with the other genotypes. Tu-Purple, Bohye, and CIP440390 could be explored in commercial production of fries for enhanced utilization of developed sweetpotato genotypes.