Do Tailored Input Recommendations and Flexible Subsidies Increase Uptake and Yields among Maize Farmers in Mexico? 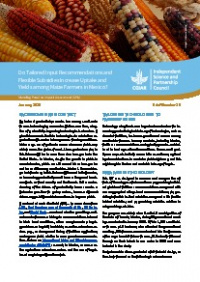 Agricultural productivity remains low among small-scale farmers in developing economies. At the same time, adoption of productivity-improving technologies is often low. A plausible reason is that the technologies do not deliver expected benefits under heterogeneous farming conditions. Maize crops are of particular concern because yields vary widely across the globe—from 1.1 tons per hectare (ha) in Sub-Saharan Africa to more than nine tons per ha in the United States. In Mexico, despite the growth in yields in recent decades, yields are still around three tons per ha and lower still among smallholders.

This research was supported by ISPC-SPIA under the grant ‘Strengthening Impact Assessment in the CGIAR (SIAC).’