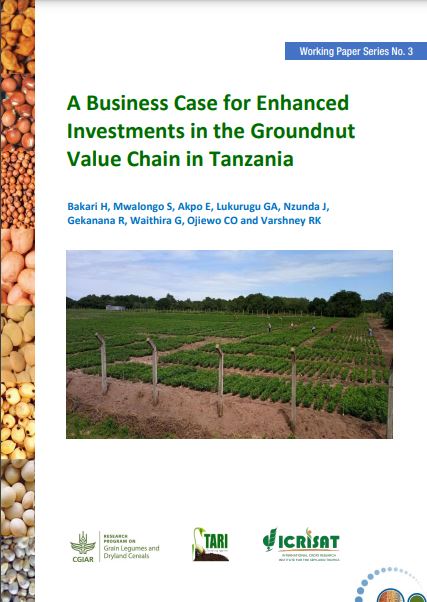 Apart from providing food, agriculture contributes to economic growth and the livelihoods of people in both urban and rural areas through trade. This study analyzes the business case for groundnut farmers and off-takers in Tanzania and beyond to identify opportunities for enhancements along the commodity value chain. A systematic sampling was used to collect data from 300 groundnut farmers in 11 districts across seven agro-ecological zones through individual interviews. Of the farmers interviewed, 240 were from Tropical Legumes (TL) III project intervention districts and 60 were from non-intervention districts. Also, 123 off-takers were purposively selected from commercial areas. Secondary data was obtained from literature and the Tanzania Agricultural Research Institute at Naliendele. Descriptive statistics, probit regression model, cost-benefit analysis and economic efficiency model were used for data analysis. The empirical results showed that a total of 17 improved groundnut varieties have been released with their adoption rate among groundnut farmers being 35%. The adoption rate was found to be influenced by age and gender, farmer group membership, availability of improved seed and seed cost. Results further showed that only 25% of the groundnut produced annually is used for subsistence purposes while 75% is for commercial purpose. It was further revealed that a farmer is assured of gaining at least TZS 475,000/ha annually by way of groundnut farming. However, only 31% economic efficiency in grain production was noted among farmers, as this was influenced by their level of education, experience and group membership. Finally, it was observed that about 21 t of groundnut grain varieties similar to those available in Tanzania is imported from neighboring Malawi and Zambia.