The modern face of breeding programs: gender fatigued no more 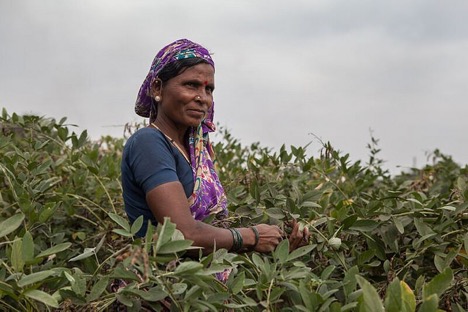 Why is it that in Malawi, the three improved varieties of pigeon pea, which were developed with supposed market-desired traits, received zero levels of adoption? Whereas the local Nthawajuni variety spread throughout the country, dominating 80% of the planted area?

Perplexing, isn’t it? Wouldn’t it make more sense that those varieties that were supposedly tailored to the market would be those adopted? In this example, this clearly wasn’t the case.

So, why didn’t this work?

In Malawi, pigeon pea production, harvest, preparation and sale are all activities which are important to, and carried out by women. While these varieties may have been selected with market-desired traits, breeders did not fully appreciate the gendered preferences of their end-users, nor fully understand how they drive adoption and use.

Today, a renewed focus on gender, fueled by donors, has increased the research community’s awareness and appreciation of the diversity of end-users. Many plant and animal breeders have not just come to recognize the importance of end-users’ preferences but also the diversity of those preferences, which arise from their socioeconomic and cultural contexts.

Yet, despite this awareness, rarely are these preferences captured sufficiently to improve adoption. End-user preferences therefore, are critical to not only adoption and use but also ensuring the success of gender-responsive breeding programs.

The coalition of the willing

This shared understanding of the importance of considering end-user preferences was a major topic of discussion at a Gender, Breeding and Genomics workshop led by the CGIAR Gender and Agriculture Research Network held in Nairobi last October. While there has been a long history of scientists realizing the importance of end-user preferences; for the CGIAR, this presented an opportunity to revisit its approaches and facilitate a dialogue between motivated scientists.

It was invigorating to see that scientists from different disciplines, from the natural to social sciences, clearly recognized the need for, and value of interdisciplinary work, teams, and the vital role of social science in scaling up the impact of breeding programs.

However, as is most often the case in interdisciplinary work, it is easier said than done. Actual execution depends on close collaboration between breeders and social scientists from the outset. It also requires a deeper, collective understanding of each of these disciplines – a condition that often faces institutional and even epistemological barriers.

Such barriers however, may not completely impede progress. The desire among the plant and animal breeding community to increase impact, together with the recognition of the value of interdisciplinary teams indicates a changing climate. Gender research therefore, plays a critical role in developing effective interdisciplinary teams, by fostering a better understanding of the angles of end-user preferences that lead to improved adoption rates and ultimately impact.

A persistent challenge to mainstreaming gender is that many scientists, including social scientists, often have a limited understanding of gender and so, fail to grasp both its methodological scope and challenges. This can be seen in the tendency to use sex-disaggregated data and gender interchangeably, and then to interpret that data without accounting for the important factors that situate their gendered outcomes.

Gender, therefore, needs to be considered from a much broader social perspective. It can then be used as an analytical tool for addressing social dynamics. Gender norms and values are constructed within, and as part of a wider social context, and are often articulated through intersectionalities. Women and men face different challenges and have access to different opportunities as a result of other elements that constitute their identities such as their economic class, ethnicity, race, age, and the kind of work they do.

Rather than simply comparing women and men, it is important to use the lens of intersectionality to better understand (1) how identities are constructed and (2) how these identities then restrict or create opportunities for certain groups, and the men and women within those groups.

With donors’ renewed interest to integrate gender research with other disciplines, there is once again scope to explore its analytical tools, which are better equipped to understand the opportunities, challenges and preferences of end-users. The recognition of the need for interdisciplinary work and teams, as was seen at this workshop, laid the groundwork to shape the modern face of breeding programs. By coupling breeders’ passion for their work, with the tools and methods that the social sciences and gender studies offer to define end-user groups and their preferences, greater adoption rates and more sustainable and equitable impact may be achieved.

So then, what do breeders want from gender research and why are donors willing to fund it? The answer is clear; adoption and impact. The details of interdisciplinary project implementation, however, are more complicated. These will be addressed in 3 subsequent blog posts, which we hope will be used to stimulate discussion in upcoming workshops.

This introductory post identifies the subsequent discussions among participants of the Gender, Breeding and Genomics workshop last October. The workshop, organized by the CGIAR Gender and Agriculture Research Network, brought together scientists from different disciplines and different project-based experiences to discuss the innovations necessary for developing gender-responsive breeding programs. An interesting perspective however, was that there was a greater focus on the end-user rather than on gender. The authors, who were also participants of the workshop question whether there was instead, a common understanding that intersectionality is gender. If not, how do we move the conversation further; from recognizing gender as only women and men towards these other aspects that shape the identity of the end-user?

In an effort to gather feedback, foster dialogue and a wider sharing of ideas on this topic, subsequent posts will further delve into what a modernized breeding program would look like if it were to incorporate the concepts discussed above, such as:

Tell us what you think by sharing your perspective through the comments section below.

Note: the next post on the need for and value of interdisciplinary thought will be posted here subsequently. Watch this space for updates. This series was developed and authored by three CGIAR Gender Postdoctoral Fellows.

Seamus Murphy is a CGIAR Gender Postdoctoral Fellow, based at the WorldFish Center in Cairo, Egypt,whose  work centers on the nexus between gender, nutrition and fish value chains in Egypt and Zambia. His work will contribute  gender-sensitive data on the trait preferences of fish among lower-income consumers and retailers to support the  development of more gender-responsive fish breeding programs at WorldFish.

Krista Isaacs is a CGIAR Gender Postdoctoral Fellow, based at the International Crops Research  Institute for the  Semi-Arid Tropics (ICRISAT) in Bamako, Mali. Krista works with the CGIAR Research  Program on Dryland  Cereals and Grain Legumes researching various aspects of gender and participatory  plant breeding for sorghum and  cowpeas, and she examines relationships between adoption and  decentralized seed systems.  Read more about  Krista and her work on her interview for the CGIAR  Gender Network’s 2017 Recognizing Women in Science Campaign.

BélaTeeken is a CGIAR Gender Postdoctoral Fellow, based at the International Institute of Tropical Agriculture  (IITA) in Ibadan, Nigeria. Bela works with the CGIAR Research Program on Roots, Tubers and Bananas  (RTB), studying gender dynamics within the cultivation of cassava in West Africa in order to develop better breeding  strategies for cassava.

Edited by Martina Mascarenhas, former Coordinator of Communications and Knowledge sharing for the CGIAR Gender and Agriculture Research Network.