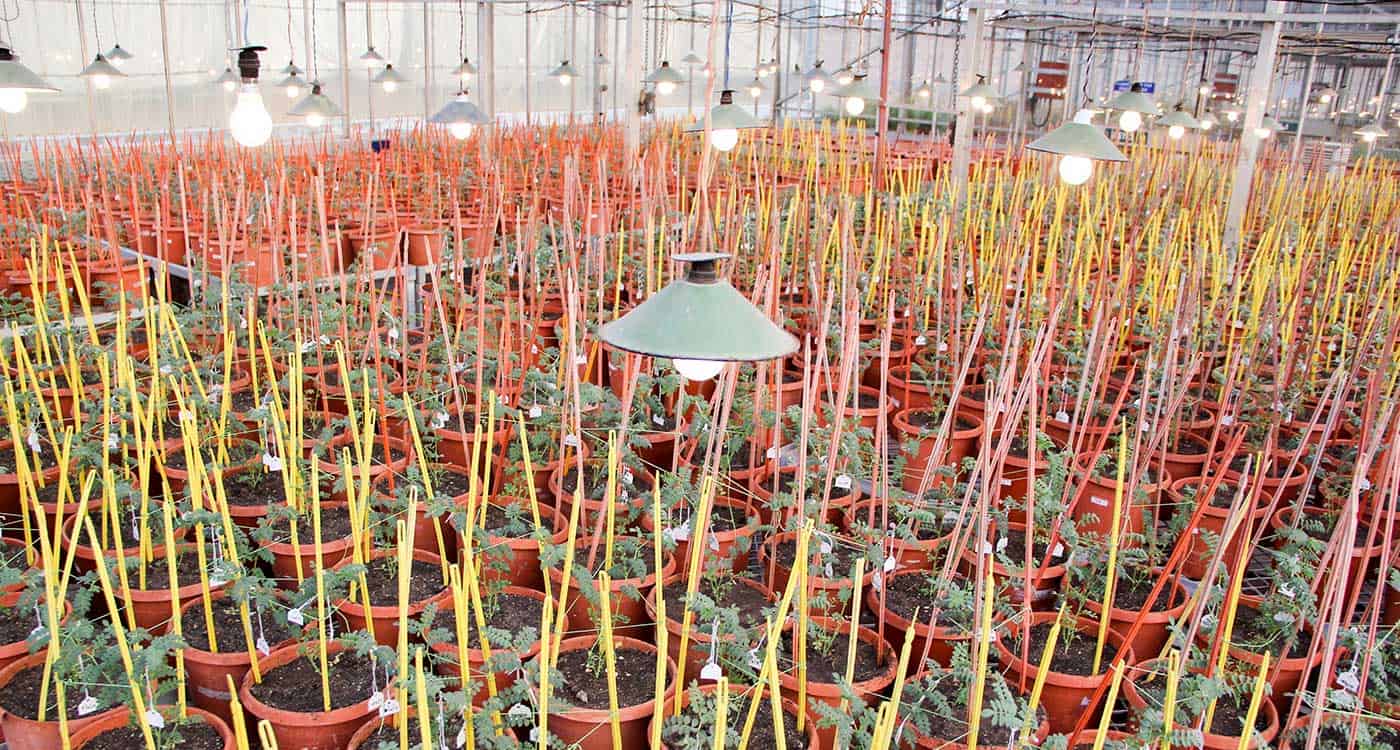 ICRISAT’s chickpea researchers have developed a breeding protocol that holds the potential to create new varieties of chickpea in half-time.

The Rapid Generation Advancement (RGA) protocol allows production of six to seven generations of chickpea in a year under controlled greenhouse conditions. The protocol has been standardized through a series of experiments conducted over two years, using six cultivated chickpea varieties -early, medium and late maturity groups.

Generation time is a game changer for achieving maximum genetic gains in crop plants. Generally, it takes seven to eight years to develop homozygous (identical) lines after hybridization with one crop generation produced per year. Given the growing need for food and nutrition, and the mounting pressures of climate change, the demand for improved varieties is more pressing today than ever.

“RGA can significantly reduce the number of years required to reach homozygosity and develop a cultivar or material for research purposes,” said Dr Pooran Gaur, Director for the Asia Research Program at ICRISAT.

Before the development of the new protocol, ICRISAT’s chickpea breeding program was producing three generations per year; first crop in the field during the crop season (October – February), second crop in the field under late-sown conditions with irrigation (February – April) and the third crop in an off-season nursery (May – July) at Hiriyur in Karnataka, south India.

During the experiments, the team found that the mean total number of generations produced per year during the experiments were 7, 6.2, and 6 in early, medium and late-maturing genotypes, respectively. The findings were described in a publication in The Crop Journal.

“This will be a game changer for fast-tracked development of chickpea varieties globally, meeting the ever-changing market needs. Varietal development with conventional breeding methods takes nearly 12 years, which is long enough for markets to change and render a variety under development unattractive to demand forces. Hastening breeding is the way ahead,” Dr Samineni said.

Additionally, the chickpea RGA protocol developed is significantly less resource intensive than RGA protocols developed for other crops such as wheat, faba bean and lentil, which requires exposure of seed to stress treatment, adjustment in wavelength of light source and application of chemicals and hormones, thus requiring specialized operations and controlled growing conditions.

The chickpea team put the RGA protocol to test on real-world breeding material by developing recombinant inbred line (RIL) mapping populations. Two RIL populations have just been developed following this protocol and have been advanced to F7 from F1 within a year.

“This RGA protocol developed for ICRISAT chickpea is very simple and cost-effective. It can be implemented easily by any breeding program with a greenhouse facility,” Dr Gaur added.

This work was taken up with support from CGIAR Research Program Grain Legumes and Dryland Cereals (CRP-GLDC).