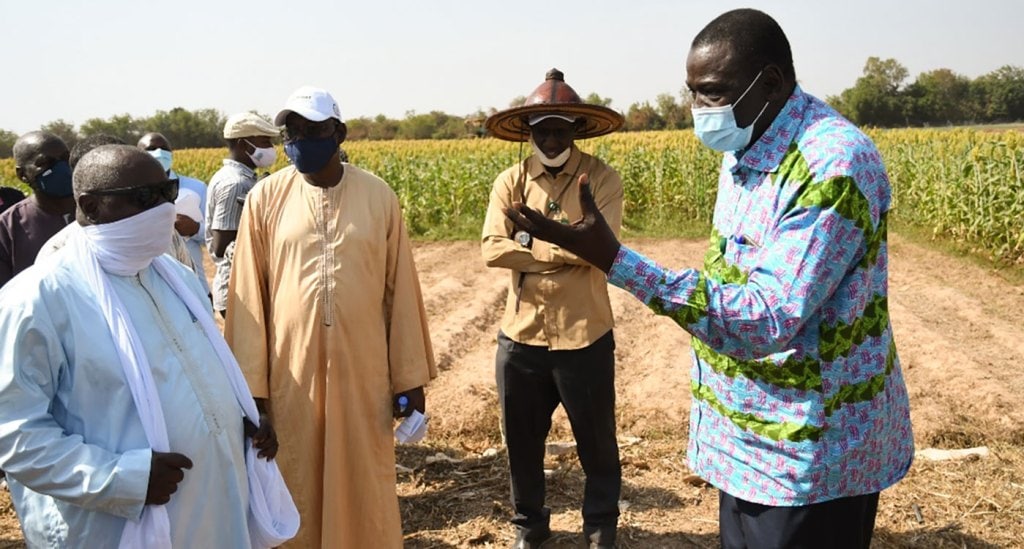 This is something we needed to know about, support, promote and make better known at the national level in order to benefit to the maximum,” said Minister Mohamed Ould Mahmoud while on a visit to the ICRISAT research station in Samanko with a group of high-level members of the Malian Ministry of Agriculture, Livestock and Fisheries. The Minister commended the organization’s contribution to sorghum, millet and legumes research for food and fodder security and the role of the genebank in protecting the crops’ genetic resources in the region.

“Our immediate priority is to prepare for the 2021-22 agricultural cropping season. I have seen the different promising varieties that have the potential to improve the productivity of both crops and livestock,” said the Minister following a tour of the ongoing trials and interaction with scientists. The field visit included a tour of the cold rooms for sorghum and groundnut seed storage, the pathology and aflatoxin laboratory, which particularly captured his attention, and the sorghum and groundnut experimentation plots of improved varieties.

Upon arrival at the research station, the Minister met with Dr Ramadjita Tabo, Research Program Director, West and Central Africa, and watched with great interest a film on ICRISAT at 2022, a year that marks the 50th anniversary of the institute. A second video on the Smart Food initiative drew his attention on the need to promote and adopt improved varieties that are climate resilient and nutri-dense.