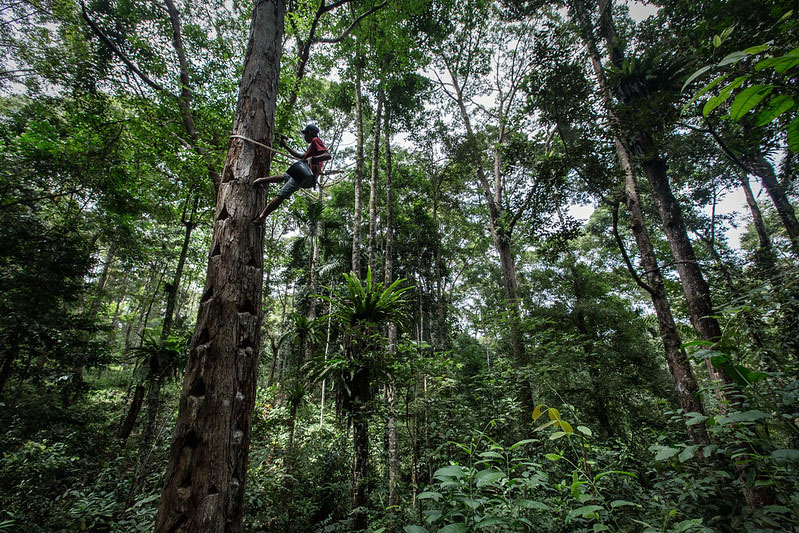 In a statement at COP26 climate talks in Glasgow, Indonesia’s President Joko Widodo made a commitment that the country’s forest and land use (FOLU) sector will reach carbon net sink by 2030, absorbing more carbon than it emits.

In light of Widodo’s remarks, the Center for International Forestry Research and World Agroforestry (CIFOR-ICRAF) – through the Global Comparative Study on Reducing Emissions from Deforestation and Forest Degradation (GCS-REDD+) hosted a science and policy dialogue, which highlighted Indonesia’s national priorities and strategies, including recent updates to the country’s Nationally Determined Contributions (NDCs).

NDCs are part of the strategy defined by the U.N. Paris Agreement to prevent post-industrial average temperatures from rising to 1.5 degrees Celsius or higher. Each country is required to provide data on greenhouse gas emissions and reductions targets it aims to meet. Indonesia is no different: the country has been preparing and implementing various corrective actions to slash emissions from land use change and peat and forest fires.

In its submitted updated 2021 NDCs, Indonesia reaffirmed its 2015 unconditional reduction target of 29 percent and conditional reduction target up to 41 percent of the business-as-usual scenario by 2030. With regard to the FOLU sector — which covers emissions and removals of greenhouse gases from anthropogenic land use, land-use change and forestry activities — commitments to help reach the NDC targets include restoring 2 million hectares of peatlands and rehabilitating 12 million hectares of degraded land by 2030.

REDD+ (Reducing Emissions caused by Deforestation and forest Degradation) initiative is an important component of achieving targets from within the land use sector. An international policy initiative, which was initially discussed at COP11 in 2005 and fully recognized 10 years later in the Paris Agreement, REDD+ was specifically designed to provide incentives to curb the release of emissions through conservation of tropical forests.

Under the initiative, Forest Reference Emissions Levels (FREL) are monitored and measured against a benchmark for evaluating REDD+ performance set based on the period between 1990 and 2012. Indonesia’s first FREL for REDD+ was submitted to the U.N. Framework Convention on Climate Change (UNFCCC) secretariat in 2015, and covered deforestation, forest degradation and peat decomposition. First FREL and plan to submit the 2nd FREL by the end of 2020.

More than 40 participants from government and non-governmental organizations participated in the CIFOR-ICRAF event in December, discussing Indonesia’s economy, national priorities and strategies for achieving NDCs and transforming the FOLU sector.

“Indonesia’s economy is expected to improve,” said Nur Hygiawati Rahayu, director of Forestry and Water Resource Conservation in the Ministry of National Development Planning of Indonesia (BAPPENAS). “We estimate that Indonesia will emerge from the middle-income trap in 2036 and become one of the top five income countries in 2045.”

This economic potential could influence Indonesia’s capacity to reach its targets, she added,  The NDC target is also a potential challenge in technical terms and in terms of politics for to this end, we need to study what the impacts will be in the future.

BAPPENAS anticipates the need for land use change for social development such as housing, agriculture and other uses.

Overall, balancing development and keeping emissions low will be a big challenge for Indonesia.

“For several years we have been one of the top 10 greenhouse gas producing countries,” she said. “We have to convey to the world that Indonesia still needs to develop, but we are committed to reduce emissions.”