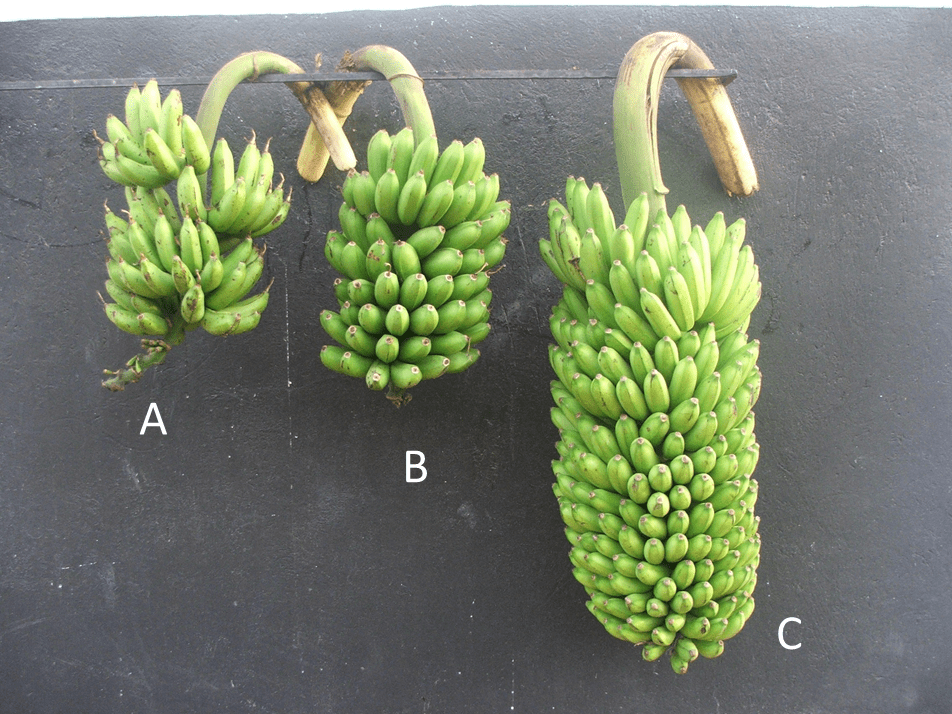 Progressive heterobeltiosis for bunch weight in bred ‘Matooke’ banana hybrids (NARITAs), when grown together with their parents and grandparents in Uganda; A: ‘Entukura’ (3x female grandparent), B: ‘1438K-1’ (4x female parent) and C: ‘NARITA 17’ (3x hybrid)

Plant breeders are generally looking for heterosis, where the offspring of a cross performs significantly better on some measure than the average of its parents. That is what makes the new cross an improvement. New research from the CGIAR Research Program on Roots, Tubers and Bananas (RTB) has shown that in bananas the improvement can be even greater. New banana varieties are often better even than the superior parent and not just the average of both parents. This phenomenon, called heterobeltiosis, along with new insights from molecular studies, promises more efficient banana breeding in future.

The bananas in question are the NARITA hybrids, named after the National Agricultural Research Organization (NARO) of Uganda and the International Institute of Tropical Agriculture (IITA). The collaboration started in the 1990s, when IITA, a partner in RTB, brought some of the hybrids it developed in Nigeria for further collaboration in Uganda. The result is the more than 31 NARITA hybrid bananas intended to combine disease resistance from wild bananas with the preferred qualities of East African Highland bananas, the cooking bananas that are a staple in the region.

Better than the best parent

In order to evaluate them, the researchers grew 31 NARITA hybrids alongside their parents and grandparents over three years. In every case, the bunch weight of the fruit was higher for the hybrid than for its grandparents. In 27 hybrids, they were better than their parents too. NARITA 17 holds the record, with bunches on average 3.5 times heavier than Entukura, its female grandparent and 2.4 times heavier than its best parent (1438K-1). Bananas show a greater degree of heterobeltiosis than any other crop examined to date.

“The parents of the best NARITAs are likely to produce superior hybrids,” said Michael Batte, “and therefore might be selected for use in future crosses.”

The discovery of heterobeltiosis in bananas could also change banana breeding strategies. Up till now, the selection of parents has been based on their ability to produce seed (a very rare trait in bananas), rather than their ability to produce good hybrids. As a result, most banana breeding tends to consist of evaluating the offspring of repeated crosses of the same few parents, hoping for a lucky break. The ability to identify those fertile varieties that also produce the greatest degree of heterobeltiosis in their offspring might boost the potential for creating new high-yielding varieties.

That could be easier in future thanks to another study from RTB, which looked at the DNA of more than 300 banana varieties in search of molecular markers for traits like bunch weight.

The main goal for banana breeders is to improve resistance to pests and diseases by crossing resistant wild varieties with productive cultivated bananas. But although wild varieties are resistant, their fruits are often small and sparse, so the crosses are low yielding. Typically, breeders discard more than 90% of all crosses, but they have to wait until the crosses bear fruit to know which ones to cull. That is one reason why it can take 20 years or more to breed a new banana variety.

Although bunch weight is affected by many genes, this kind of genome-wide association study, or GWAS, can identify regions of the DNA that predict higher bunch weight. The study also identified markers for the number and size of individual fruits. Armed with these molecular markers, breeders can eliminate unproductive crosses much sooner, massively increasing the efficiency of breeding programs.

The difficulty of breeding new banana varieties is balanced by the ease with which those varieties can be multiplied. Bananas are generally propagated vegetatively, by removing a sucker plant that is genetically identical to the parent plant. This means that the benefits of superior performance will not be lost over time.

However, there is also a downside. While heterobeltiosis is good for bunch weight, on another measure it creates problems. Half of the NARITA hybrids were taller and slenderer than their parents and grandparents. Although plant stature does not directly affect the yield of bananas, ideally the plant needs to be shorter with a thicker pseudostem to carry the weight of heavier bunches. Plant stature and bunch weight are fortunately not correlated, so, armed with molecular markers, breeders will be looking out for big bunches coupled with a plant architecture capable of supporting higher productivity.