HarvestPlus Partners with Indonesia Govt. to Scale Up Zinc-Biofortified Rice 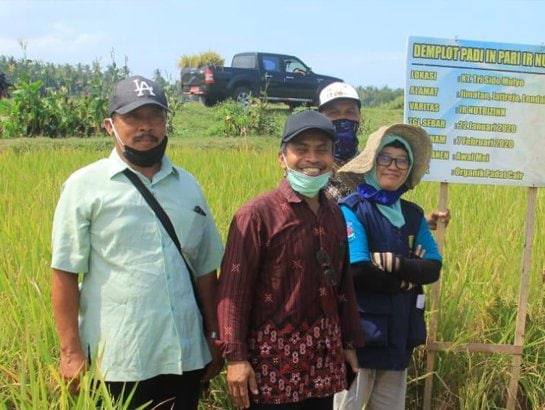 HarvestPlus is working with the Indonesian government to scale up equitable and cost-effective access to nutritious zinc-biofortified rice in the southeast Asian nation. The government’s target for 2021 is to have zinc rice planted on 100,000 hectares (ha) of farmland, primarily in provinces that show the highest rates of childhood stunting, and then increase the planting area in subsequent years.

The promotion of zinc rice is part of the government’s strategy to address the effects of widespread malnutrition—particularly stunting. In 2018, close to 3 in every 10 children under five years of age in Indonesia were stunted.

Several risk factors influence stunting, including maternal knowledge about nutrition, socio-economic background, genetics, and inadequacy of minerals in the diet, especially iron and zinc. The lack of zinc consumption during the formative years of life is a significant contributor. For example, a research study in Kejawan Putih Tambak Surabaya, Indonesia, on stunted and non-stunted infants concluded that toddlers with inadequate zinc levels were at risk of a nearly eight times greater level of stunting than children with adequate zinc levels.

Zinc also plays a key role in building healthy immune systems, which are the body’s first line of defense against infection. There is also a growing body of evidence that shows the effectiveness of zinc in helping to combat COVID-19. For example, a Spanish study shows that after adjusting for age, sex, illness severity, and treatments, every unit increase of zinc in the blood was associated with a 7 percent lower likelihood of dying for people infected with COVID-19.

HarvestPlus, which is part of the CGIAR global agricultural research partnership, is actively engaging with Indonesian government partners and actors along the value chain to design a roadmap for introducing zinc rice to producers and consumers. The Ministry of National Development Planning of the Republic of Indonesia (BAPPENAS) is HarvestPlus’ primary partner in the early scaling process.

Anang Noegroho, director of Food and Agriculture at BAPPENAS, highlighted Indonesia’s growing malnutrition challenges in a recent webinar on the role of fortification and biofortification in the country.

“Our recent survey data also show a deficiency of nutrients, especially among pregnant mothers. Thus, to best combat these nutritional challenges, the government is trying to preserve the safety and quality of the food produced, through biofortification. As per its National Program Priority, the government has listed food fortification and biofortification as their first and foremost priority,” Noegroho said.