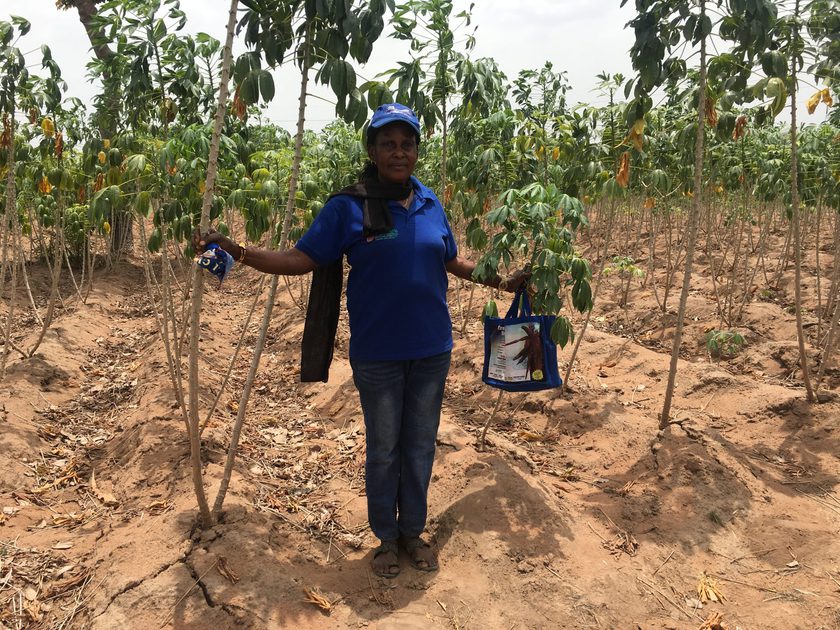 When the Building an economically Sustainable, Integrated Seed System for Cassava (BASICS) project was launched in April of 2016, cassava stems were not seen as a marketable commodity in Nigeria. Farmers used their stems from the previous season or borrowed from friends or neighbors who were harvesting roots. The only reliable way to get new varieties was from governments, NGOs, or project campaign style free distributions of stems. However, farmers sometimes do not remember the names of the improved varieties, which are mostly some combination of letters and numbers. Sometimes new varieties and old ones got mixed up in the field, so farmers were often unsure if they were planting improved varieties or not.

This situation began to change in 2016, when BASICS began as a four-year project, with a bold vision to set up a commercially viable and integrated cassava seed system. BASICS made some systemic changes in the Nigerian seed sector. VSEs (village seed entrepreneurs) were set up across the states of Benue, Abia, Akwa Ibom, Imo and Cross Rivers. Project partners Catholic Relief Services (CRS) and the National Root Crops Research Institute (NRCRI) mentored the VSEs as they became specialized seed producers on a hectare or two of land, to sell directly to cassava farmers. “Some VSEs are not business-minded and we train them, but they drop out,” explains Oluwatosin Oni of CRS. “Other VSEs go out of their way to sell stems and try to make a business out of it. One VSE harvested a bunch of roots, put them on his motorbike, to show other farmers and promote his cassava seed.”

BASICS also piloted an alternative, the processor-led model (PLM), where food manufacturers who bought cassava roots for processing could provide seed of a chosen variety to a network of farmers who would then supply the required quantity and quality of roots to their factory. The processors used demand-creation trials (DCT) to choose the most suitable variety for their needs.

The VSEs and processors needed a supply of foundation seed, and this became possible as BASICS facilitated the establishment of two new private companies: IITA GoSeed, affiliated with the International Institute of Tropical Agriculture (IITA) in Ibadan and Umudike Seeds at the NRCRI. IITA GoSeed and Umudike Seeds produced breeder seed, which is used to grow foundation seed. High-quality disease-free breeder seed of an improved variety is crucial for ensuring the caliber of the rest of the seed in the system. “These are pioneer foundation seed producers that will help in the establishment of a thriving seed system,” says Mercy Diebiru-Ojo, an IITA plant breeder and manager of vegetatively propagated crops at IITA GoSeed.

Cassava seed is slow to reproduce, so BASICS adapted a new technology from SAHTECHNO, called semi-autotropic hydroponics (SAH). A SAH lab grows cassava cuttings under lights in varied substrates in small plastic boxes. Every two to three weeks, two new plantlets are cut from each plantlet, and then planted in a new box, until they are ready to go to a screenhouse. This allows for the rapid multiplication of cassava planting material in the lab. This had never been tried with cassava, yet BASICS established SAH operations at both seed companies and with three processors, significantly increasing the volume of seed produced. “SAH helps to ramp up and scale up clean seed,” says Peter Kulakow, a plant breeder at IITA. “We have been able to show that SAH is viable to scale up varieties, but that does not preclude using other multiplication systems as well.”

Vegetative seed is notoriously difficult to certify, and then there is a question of who foots the cost of inspection along the seed value chain. BASICS collaborated with the government seed certification agency, National Agricultural Seeds Council (NASC), to link them with the VSEs and to facilitate seed inspections. This partnership has led to several innovations to enhance the reach and reduce the costs of inspection, including rollout Cassava Seed Tracker (CST) for e-certification of cassava as first digital system to be used for seed certification in Nigeria, which could be a model for certifying vegetative seed elsewhere. For example, seed regulations were revised to allow third-party certification, so that local professionals (such as school teachers, input dealers and agronomists) are trained to inspect cassava seed plots and fill in the appropriate online forms in CST, developed by BASICS for e-certification. Cassava seed value chain integration, marketing and e-certification were made possible by the CST, an app developed by IITA to follow cassava through the seed system and connect buyers and sellers.

Due to Covid-19 travel restrictions, BASICS held its final meeting virtually on 18 and 19 May 2020.  48 people closely involved in the project participated virtually from Nigeria, the USA, Peru, Tanzania, Canada, and the UK. They discussed the achievements and lessons learned over the project period, including:

The BASICS project was successful due to the cohesion of the partners. “Coordination was an important need; we were attempting to change many long-standing habits while having to manage unexpected hurdles, like a major policy change that affected the flow of project funds.” said Hemant Nitturkar, BASICS project manager “We solved challenges as a team and the project successfully broke new ground.” As a result of this achievement, the Bill & Melinda Gates Foundation (BMGF) has funded a second, five-year phase, under the leadership of IITA. In phase 2, BASICS will be expanded to Tanzania. The partners are eager to continue working together to consolidate the formal cassava seed system in the two countries. “We appreciate the intellectual framework that the CGIAR Research Program on Roots, Tubers and Bananas provided for what a viable commercial seed system would look like”, said Lawrence Kent, the Senior Program Officer at BMGF who oversaw the BASICS project. “All the components came together to make a functioning seed system.”

The distinctiveness of BASICS is that the money earned by selling and certifying cassava seed makes the new system self-sustaining. Sales figures also inform the plant breeders and seed producers what types of varieties consumers demand.