Forage sorghum hybrid hailed as a landmark cultivar in India 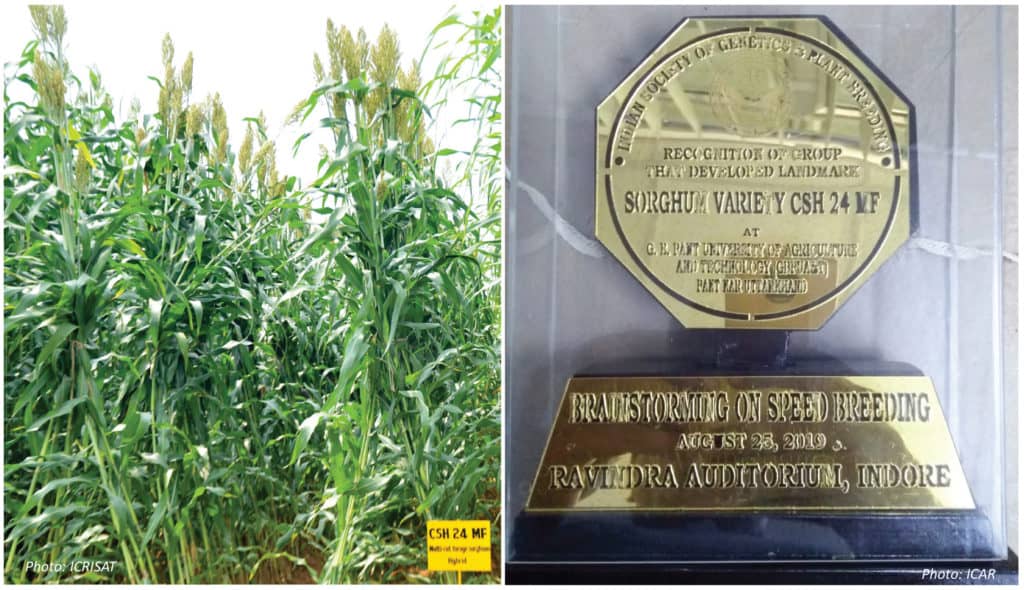 This is significant considering that currently, India – the world’s leading milk-producing country – has a major deficit of 35% for green fodder. Known for its excellent yield and quality traits, the sorghum hybrid CSH 24 MF is not only widely adopted by farmers across the country, but also used as the national check – the gold standard against which other cultivars are tested – in national level tests for other forage sorghum hybrids. As of today, it occupies almost a third of the total area under forage sorghum in the country.

Up to 70% of milk production costs are livestock feed. Therefore, it is critical to develop economical yet nutritious sources of feed. Dual-purpose or fodder crops are among the least expensive sources of nutrients for livestock. However, against the annual forage requirement of 1325.7 million tons (816.8 and 508.9 million tons of green and dry fodder respectively) to support existing livestock population, the total annual forage production is 978.7 million tons (525.5 and 453.2 million tons green and dry fodder respectively). Currently, there is a net deficit of 35.6% for green fodder, 10.95% for dry crop residues and 44% for concentrate feed ingredients.

The ‘multi-cut’ (affording several cuttings over its lifetime) forage hybrid CSH 24 MF was developed by GB Pant University of Agriculture & Technology (GBPUA&T), Pantnagar, Uttarakhand, India, using its Pant Chari-6 as the male parent, and ICRISAT-bred ICSA 467 as the female parent. It was identified and released in 2009, and after extensive testing across the country, the hybrid has steadily gained popularity among farmers across the nation.

Moreover, it is used as the national check in All India Coordinated Sorghum Improvement Project (AICSIP) tests for pre-release evaluation of all new forage sorghum hybrids. Recently, the hybrid was given ‘Special Recognition’ as landmark cultivar for its excellent yield, quality and adaptability, which has led to its wide acceptance by sorghum farmers in India.

As the contributor of the vital female parent, ICRISAT has played a key role in this partnership – one of the most successful examples of collaborative research for development in CGIAR.

The demand for this hybrid is so high that the ICAR – Indian Institute of Millets Research grants licences to 10-12 seed companies each year to produce the seeds; part of the licence fee is shared with ICRISAT due to its contribution of the female parent.

This work is done as part of CRP on Grain Legumes and Dryland Cereals (GLDC).

For more on ICRISAT’s work on sorghum, go to http://exploreit.icrisat.org/profile/Sorghum/193

The post Forage sorghum hybrid hailed as a landmark cultivar in India appeared first on Grain Legumes and Dryland Cereals.