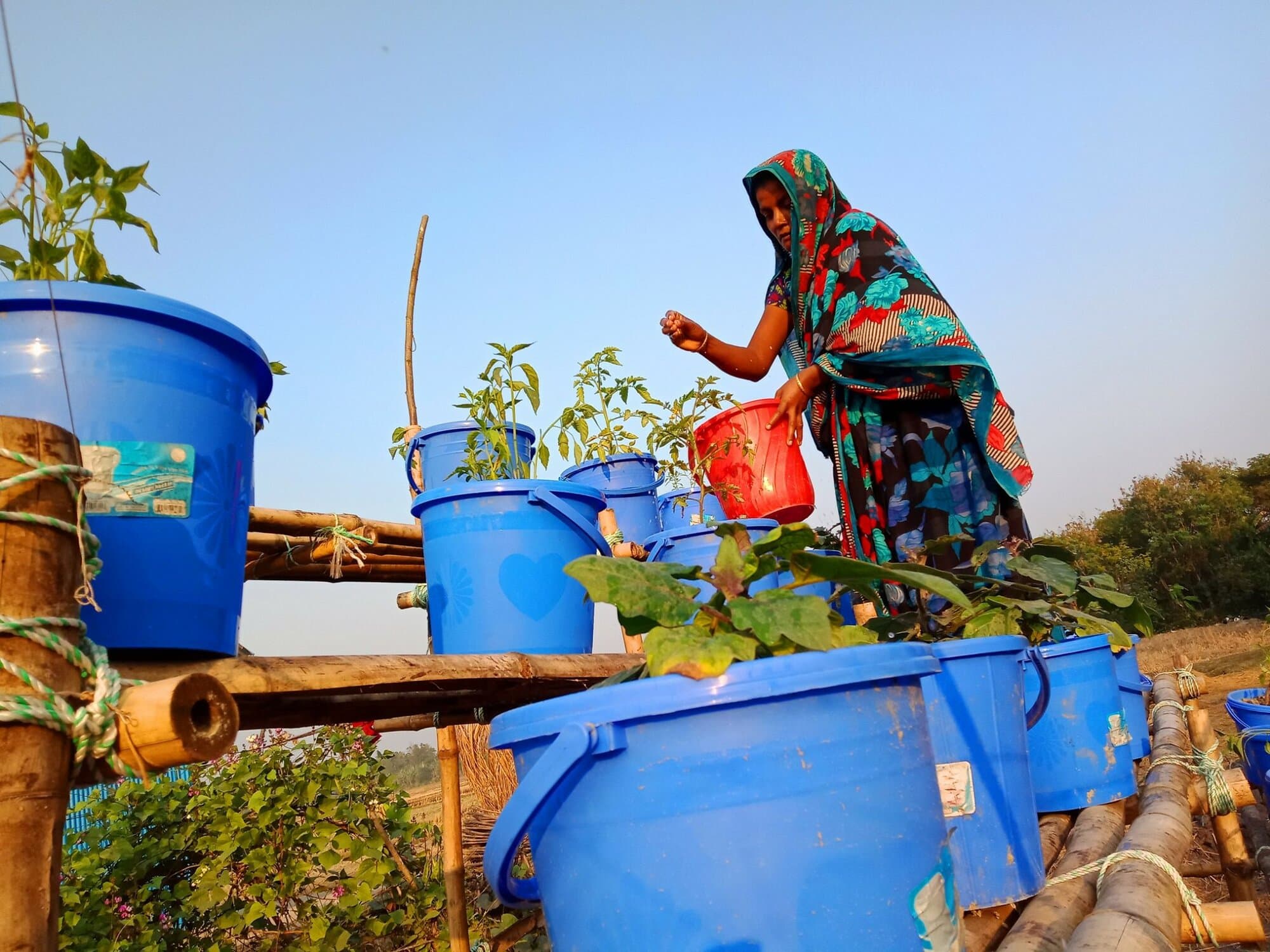 Food systems in low- and middle-income countries (LMICs), particularly in Africa and Asia, face direct stress from climate-induced changes and house a large population of smallholder farmers who are dependent on their immediate environment for their livelihoods, food and nutrition.

Climate change is a potential threat to gender equality in agriculture and food systems. Women smallholder farmers are more vulnerable than men to climatic shocks and stressors as they tend to be more dependent on agriculture and natural resources and have less diversified livelihoods.  Structural gender inequalities impede women’s ability to respond to, adapt to or mitigate climate change impacts. Women tend to have fewer and lower-value assets as well as less access to land, capital, labor, agricultural inputs, and social and institutional networks. Coupled with social norms and gender roles that limit their agency, both at the household and community levels, women’s access to and use of climate-smart technologies is constrained.

Women, however, can drive efforts to build climate resilience if existing inequalities and the underlying causes are addressed. There is a growing body of evidence of effective ways to do so.

Our climate–agriculture–gender inequality hotspot index is based on publicly available representative data with geospatial information capturing i) climate hazards, ii) women’s exposure and iii) women’s vulnerability due to gender inequalities. The hazards are measured by the share of rural population likely to face specific climate hazard types, using data from the CGIAR Research Program on Climate Change, Agriculture and Food Security. Women’s exposure is measured based on their labor participation and hours worked in agriculture, including the relative importance of the crop or commodity, using Labor Force Survey (LFS) data. Women’s vulnerability due to gender inequalities is proxied by five discriminatory social institutions captured in the Social Institutions and Gender Index (SIGI) 2014. We use principal component analysis to construct an ordinal hotspot index based on those data.

LMICs were then ranked by the climate–agriculture–gender inequality hotspot index and visualized on a global map (figure 2). Table 1 presents part of the hotspot ranking. For instance, Gabon is the ‘hottest’ as it scores highest on the index. ‘Coolest’ countries are the Dominican Republic and El Salvador. The methodology was applied at a subnational level to four relatively hot, data-rich countries, including Mali and Zambia in Africa, and the ‘hottest’ Asian countries, namely Pakistan and Bangladesh.

Zooming in on climate–agriculture–gender inequality hotspot areas within countries

To identify crop/category specific climate–agriculture–gender inequality hotspots at the first administrative subnational level (e.g., province or region) in the four selected countries, we used a similar approach, but slightly different data. We used the same indicator of climate hazards, but at a finer grid. For women’s exposure, we used LFS data, but included women’s share in labor participation and share of hours worked for six specific crops or categories. The indicator of women’s vulnerability due to gender inequalities uses similar components as the SIGI 2014, but derived from other data representative at subnational level, more specifically, the Gender Development Index (2019), child marriage prevalence (based on LFS data), domestic violence prevalence (demographic and health surveys) and son bias (census data).

For instance, the subnational mapping for Mali reveals that Tombouctou Region in northern Mali is a hotspot for livestock (figure 3), suggesting that women engaged in livestock keeping are experiencing high climate risk, which is corroborated by other evidence. Tombouctou region is characterized by a pastoralist livestock economy and is experiencing increasingly warm and (extended) dry weather. Women in pastoralist livelihoods in the Sahel contribute a large share of labor to livestock keeping, even if they are less likely to control livestock. Women in Toumbouctou are subject to restrictive norms and roles hindering their mobility and their access to resources, services and diversified livelihoods. They face heavy domestic and care workloads, along with increasing productive workloads because of male outmigration.

Relevance and use of climate-agriculture-gender inequity hotspot methodology

Mitigating women’s disproportionate risk to climate change impacts in agriculture and food systems, and enabling them to be agents of change in building climate resilience, requires addressing root causes of gender inequality. The identification of hotspots can support effective targeting to channel climate resilience-building investments to countries and areas where women are the most at risk. It can be used for national, regional or temporal comparisons and help assess effectiveness of resilience-building policies or programs.