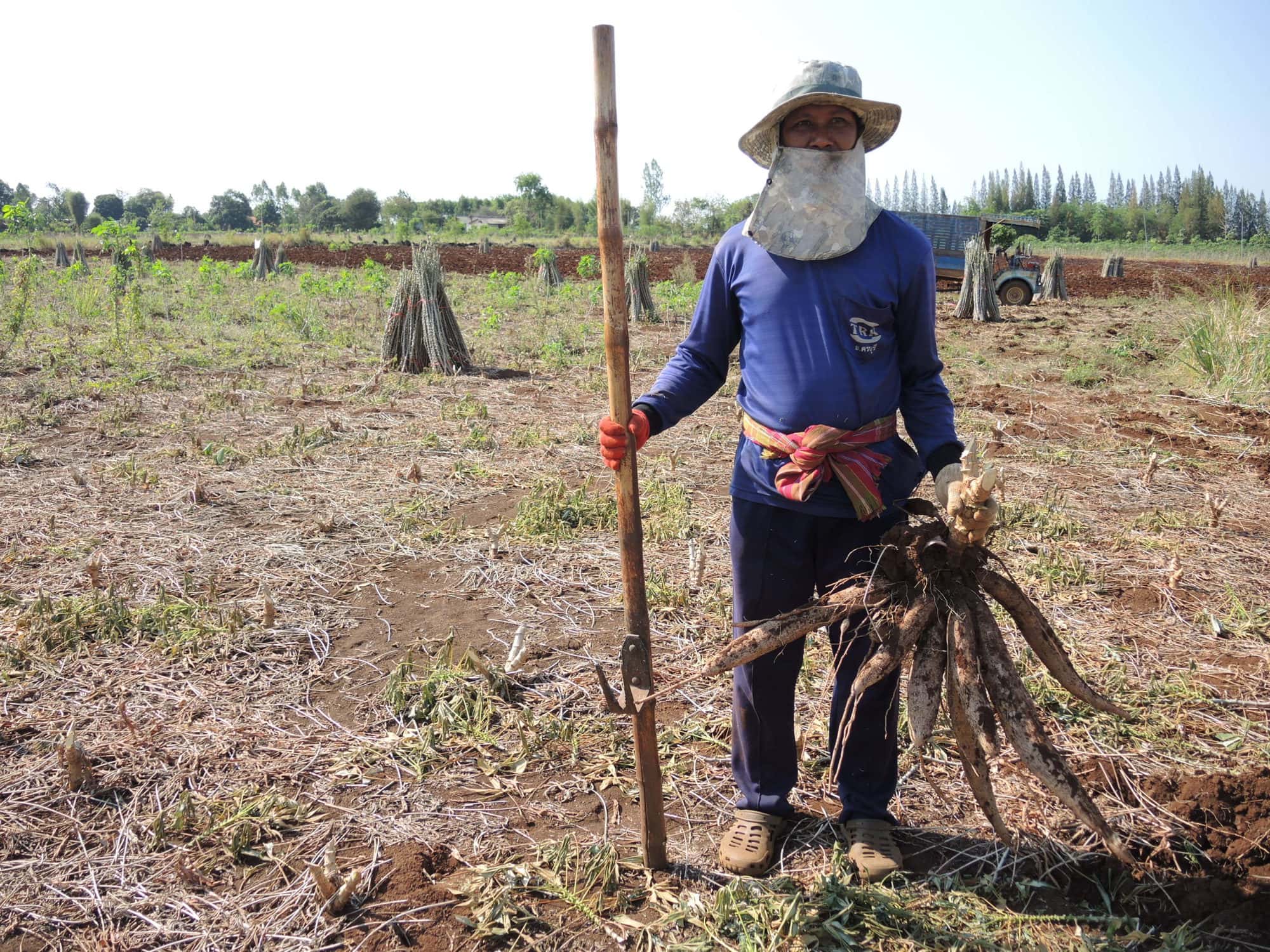 The root, tuber and banana videos hosted on Access Agriculture include two made with a CGIAR Research Program on Roots, Tubers and Bananas (RTB) project, the IITA-led, African Cassava Agronomy Initiative (ACAI). One video filmed in East Africa shows the benefits of quality declared seed (QDS), and how to use it. Another video from Nigeria describes a practical way to estimate the yield of cassava in the garden, before digging it up. This helps the farmers know how many roots to expect when they start to contact buyers.

Because cassava roots can be big, they can also be difficult to harvest, especially since most family farmers dig up the field by hand. Anything that reduces labor can make the crop more attractive for small-scale commercial growers. In a newly released video called Cassava Harvest Made Easier, Thai farmer Amnart Traprasomrong talks about an ingenious tool that takes some of the backbreaking work out of cassava. The tool is a notched, iron fork that any village blacksmith can make. When screwed onto a sturdy pole, the tool levers the cassava roots out of the earth.

“We were filming another video on cassava mealy bug with the Alliance of Bioversity International and CIAT when we saw this tool in use. It was such a practical innovation that we knew we had to make a special video on it,” says Marcella Vrolijks, videographer at Agro-Insight, the company that produced the video.

During a video production training workshop in Kenya, organized by Access Agriculture in 2015, one of the teams of trainees developed a video called Making Banana Flour. Bananas have a relatively short shelf-life and by working with a local women’s group the trainees learned that banana peels are also highly nutritious and that the unpeeled green fruits can be chopped, solar-dried, and made into flour.

The banana flour video was hosted on the Access Agriculture platform and promoted through its social media. In only 5 years the video has already been translated into 14 languages, including Spanish, Persian and Bangla. More than 1,500 people from 64 countries have already downloaded the video, while over 600 have downloaded the accompanying factsheet.

“Even people who have eaten bananas for generations are surprised when they see this video and learn how bananas can be turned into different types of food. This has triggered various projects to pay a little for us to translate this video along with some other training videos on healthy food. The organizations then use the local language versions in their community outreach programs,” says Josephine Rodgers, executive director of Access Agriculture.

In 2019, Access Agriculture translated nine videos on cassava, bananas and potato to Spanish, with support from RTB. “The major root, tuber and banana crops are grown across the world’s tropics, so video translation is an important way to share ideas cross-culturally, in this case from Africa and Asia to Latin America,” says Graham Thiele, director of RTB.

The videos on roots, tubers and bananas are available in English and French. Some are also available in Spanish, Kiswahili and other African and Asian languages.

These videos on roots, tubers and bananas can be sent via social media, screened in villages or in farmer associations. They can be loaded onto cell phones of farmers, researchers and extension agents. Videos are a great way to communicate the many innovations that are possible with these important root, tuber and banana crops.

The joy of farming

The ups and downs of bananas