A video is worth a million sweetpotato vines 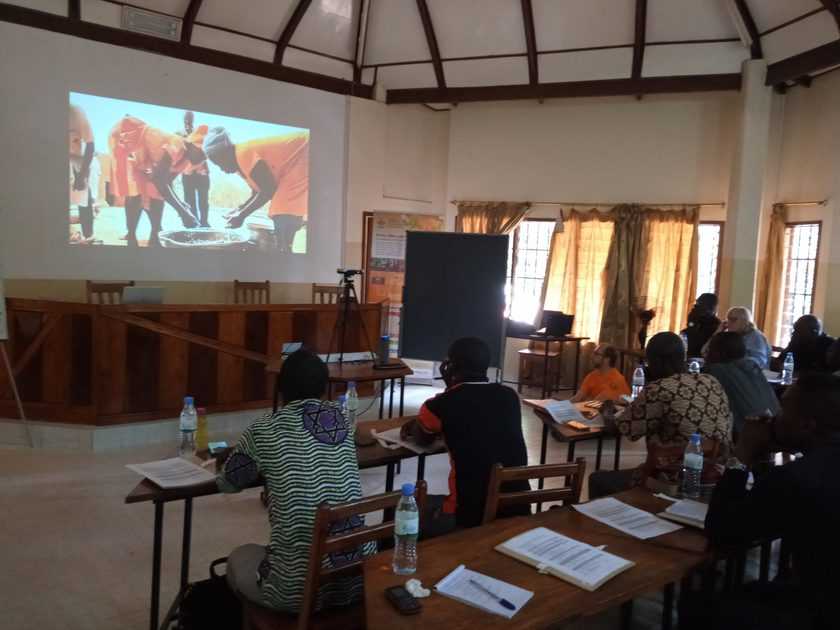 A picture, they say, is worth a thousand words. Images can convey ideas faster and more effectively than written words, and if many people in the target audience cannot read, pictures may be the only way to reach them. Faced with low levels of literacy in rural Ghana, particularly among women, the CGIAR Research Program on Roots, Tubers and Bananas (RTB) turned to videos in the local languages to promote the use of nutritious orange-fleshed sweetpotatoes at scale among households in Ghana

This novel idea was well received but faced two main problems. First, people are more familiar with white or cream fleshed varieties and did not know about the nutritional benefits of the vitamin A precursors that make OFSP orange.

Secondly, maintaining supplies of healthy planting material for OFSP is difficult. Stocks need to be irrigated and protected from animals and insects during the dry season. They may also accumulate pests and diseases, damaging future crops and reducing yields. Triple S, which stands for Storage in Sand and Sprouting, is a technique that RTB developed to address these problems and that has been trialed in Ghana for two years.

The Triple S scaling project included three gender-sensitive communications efforts to promote OFSP. Face to face demonstrations ensured high participation by women, while radio programs broadcast the information widely. The greatest impact, however, probably came from locally produced training videos in which farmers familiar with the technology explained it to their peers.

On with the show

The project used an approach called zizo, for zooming in zooming out, to develop the videos, drawing on the real experiences of farmers and testing the videos in a variety of contexts before disseminating them widely. Partners organized shows in villages across Upper West and Northern Ghana, usually in the late afternoon or early evening, which often attracted more than 100 people to the screening. On average, more than half — 65% in fact — of the audience was women.

The videos show the Triple S technology and explain the nutritional benefits of OFSP with a demonstration of three dishes that could be prepared with OFSP. Screenings provoked a huge demand for OFSP, and having seen the videos many farmers wanted to place an order for OFSP vines. RTB worked with local partners to meet the demand and supplied around 4 million cuttings to more than 24,000 farmers, 80% of them women.

A survey at the end of the program revealed that the videos had been effective in improving the knowledge, attitudes and practices of women and men concerning OFSP and the Triple S innovation. Despite the greater participation of women in the screenings, adoption was higher among men than women. About 43% of the men who saw only the video adopted Triple S technology, while among those who saw the video and a demonstration, adoption was at 63%.

These farmer-to-farmer videos not only conveyed complex processes well, the testimony of the farmers in the videos also convinced members of the audience to try the innovations on show, even if they had to pay to do so. In this case, a good training video in the local language was worth so much more than a thousand words. It encouraged women and men to adopt a new technology package and, in the future, we fully expect to see improvements in health and livelihoods as a result.

All videos that are part of this series are available on AgTube by searching for Triple S.

This blog is written by Thomas Van Mourik and Rosemary Kihiu.