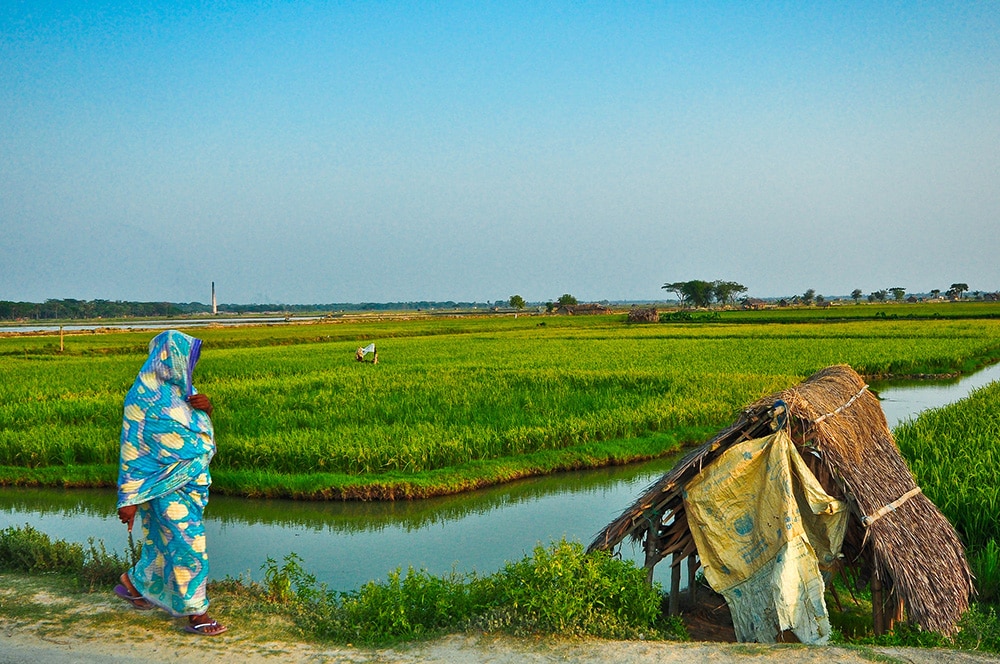 Due to Bangladesh’s frequent water shortages, sufficient water to irrigate rice fields is increasingly scarce. Additionally, due to global warming, severe changes in the pattern of precipitation and drought have become more prevalent, posing a substantial danger to managing water for rice farming. Thie purpose of this study was to determine the prospective for alternate wetting and drying to reduce greenhouse gas emissions and its effect on rice production and irrigation water saving in the farmers’ rice fields.

Rice (Oryza sativa L.) is the fundamental food to Bangladesh’s survival. It is the primary source of nourishment for 164.6 million compatriots. The early monsoon aus (upland rice), the monsoon aman (wet season rice), and the dry winter boro (dry season rice) are the three seasons in which rice is farmed.

Among them, boro rice is typically planted in November–December and harvested in late April–early May in properly irrigated conditions. Boro rice has expanded to 45.91% of total rice area in 2020 from 9% in 1966–67 as a result to the advent of shallow water pumps. This growth necessitated extensive irrigation water consumption, leading groundwater tables to fall at a pace of 4 cm per year, resulting in a rising water shortage. Bangladeshi farmers are now spending roughly 30% of the entire cost of rice production for irrigation which is mainly operated by irrigation pump owners.

Typically, pump owners offer irrigation water on a contractual basis for the duration of each season, so ensuring the continuity of farmers. He determines the complete irrigation program independently and at a set cost. The owner begins irrigating farmers’ fields in his command area on one side and proceeds serially from one plot to the next until he reaches the last plot.

Generally, farmers want to save as much water as possible throughout their irrigation shift. Additionally, most farmers feel that maintaining standing water in rice fields at all stages/phases is necessary to guarantee a larger harvest. They are spending around 2500−5000 liters of water to produce one kilogram of rice.

But scientifically, this quantity of water does not require from a physiological standpoint as continuous standing water is needed only at transplanting, blooming and grain filling stage/phase to avoid water stress. This usual approach of continuous flooding (CF) leads to substantial surface runoff, flow and infiltration, accounting for around 80% of total water consumption.

By 2025, Asia’s available water supplies per capita are anticipated to decrease by 15–54% from 1990 levels. Like other ricegrowing regions on the Asian continent, Bangladesh is already experiencing water constraint, which means farmers need water-saving technology to produce rice with less water.

Due to Bangladesh’s frequent water shortages, particularly during the dry boro season, sufficient water to irrigate rice fields is increasingly scarce. Additionally, due to global warming, severe changes in the pattern of precipitation and drought have become more prevalent in recent decades, posing a substantial danger to manage water for rice farming soon. The increased quantity of atmospheric greenhouse gases (GHGs) viz., CH4 and N2O is a significant contributor to global warming and climate change. Rice farming is accounting for about 11% and 6% of global CH4 and N2O emissions, respectively while in Bangladesh it contributes 33% of agricultural GHG emissions.

Irrigated rice is the most potential source for emitting 70–80% of global CH4 followed by monsoon rice (15%). The International Rice Research Institute  developed an alternating wetting and drying (AWD) irrigation strategy to save water and mitigate the emission of CH4 and N2O in rice fields instead of continual flooding (CF). Compared to CF, AWD reduced CH4 and N2O emissions by 45–90%, and irrigation water usage by 15–35% without decreasing rice productivity.

AWD was also found to lower arsenic deposition in grain by 64%. Leaching losses of soil N may also be decreased by reducing the percolation loss of irrigation water in AWD. AWD may increase the soil P status by increasing the number of aerobic microorganisms with a greater organic matter content by earthworm activities, hence, resulted in strong root anchoring, nutrient absorption, increased number of productive tillers, and eventually increased grain production.

Apart from the saving of irrigation water by 70% and CH4 emissions by 97%, AWD was rebuked for 33% yields loss while N2O emissions were more than quadrupled. As discussed previously, the disparate effects of AWD on irrigation water use, GHGs emissions, and grain yields underscore the importance of additional research to increase our understanding of the relationships between cultivation practices, local environments, rice growth, and GHGs emissions.

This information will be essential in assisting agricultural extension agencies and smallholder farmers for the implementation of AWD. The purpose of this on-farm study was to determine the prospective for AWD to reduce CH4 and N2O emissions and its effect on rice production and irrigation water saving in the farmers’ rice fields at Feni and Chattogram districts of Bangladesh.

We studied the efficacy of AWD in terms of water savings, paddy production, and GHG emissions in farmers’ paddy fields at Feni and Chattogram Districts. The irrigation water consumption was significantly decreased by 24% in AWD with 224% greater water productivity. Hence, the irrigation costs were saved by 23.41% than the CF. By this time the paddy yield was improved significantly by 3% in AWD compared to CF.

The AWD decreased seasonal CH4 emissions by 47% than CF but no effect on seasonal N2O emissions. In AWD, the intensity of GHG was 42% lower relative to CF. Simultaneous accomplishment of increased grain production, water conservation, and acceptable GHG emission reduction is a prerequisite for AWD adoption by existing local farmers since water and environmental conservation are not reflected in the farmers’ profit in the country.

Field experiments demonstrating AWD’s capability should be conducted in Bangladesh under a variety of agroecological zones, soil types, and farmer management circumstances. To make AWD profitable to farmers, rather than pump owners, a community-based, prepaid card-metering subsurface irrigation system should be established.

Read the study: (This version is not peer-reviewed)
Hossain, MM and Islam MR (2022) Farmers’ Participatory Evaluation of Alternate Wetting and Drying Irrigation Method on the Greenhouse Gas Emission, Water Productivity and Paddy Yield in Bangladesh. Preprints 2022, 2022020064