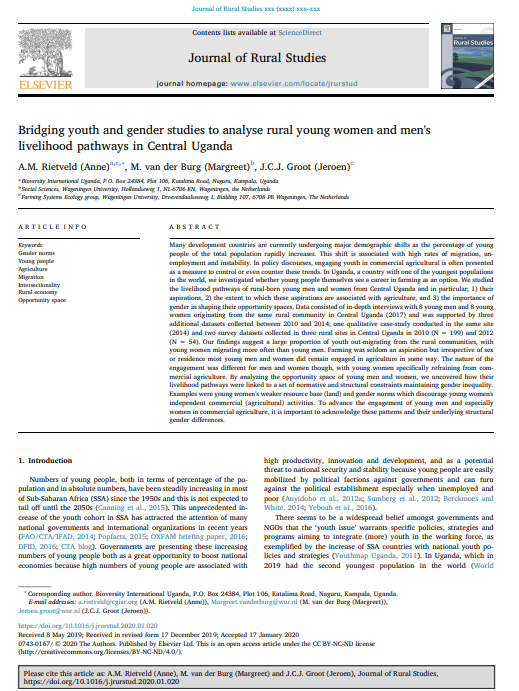 Many development countries are currently undergoing major demographic shifts as the percentage of young people of the total population rapidly increases. This shift is associated with high rates of migration, unemployment and instability. In policy discourses, engaging youth in commercial agricultural is often presented as a measure to control or even counter these trends. In Uganda, a country with one of the youngest populations in the world, we investigated whether young people themselves see a career in farming as an option.

We studied the livelihood pathways of rural-born young men and women from Central Uganda and in particular; 1) their aspirations, 2) the extent to which these aspirations are associated with agriculture, and 3) the importance of gender in shaping their opportunity spaces. Data consisted of in-depth interviews with 8 young men and 8 young women originating from the same rural community in Central Uganda (2017) and was supported by three additional datasets collected between 2010 and 2014; one qualitative case-study conducted in the same site (2014) and two survey datasets collected in three rural sites in Central Uganda in 2010 (N = 199) and 2012 (N = 54). Our findings suggest a large proportion of youth out-migrating from the rural communities, with young women migrating more often than young men. Farming was seldom an aspiration but irrespective of sex or residence most young men and women did remain engaged in agriculture in some way.

The nature of the engagement was different for men and women though, with young women specifically refraining from commercial agriculture. By analyzing the opportunity space of young men and women, we uncovered how their livelihood pathways were linked to a set of normative and structural constraints maintaining gender inequality. Examples were young women’s weaker resource base (land) and gender norms which discourage young women’s independent commercial (agricultural) activities. To advance the engagement of young men and especially women in commercial agriculture, it is important to acknowledge these patterns and their underlying structural gender differences.