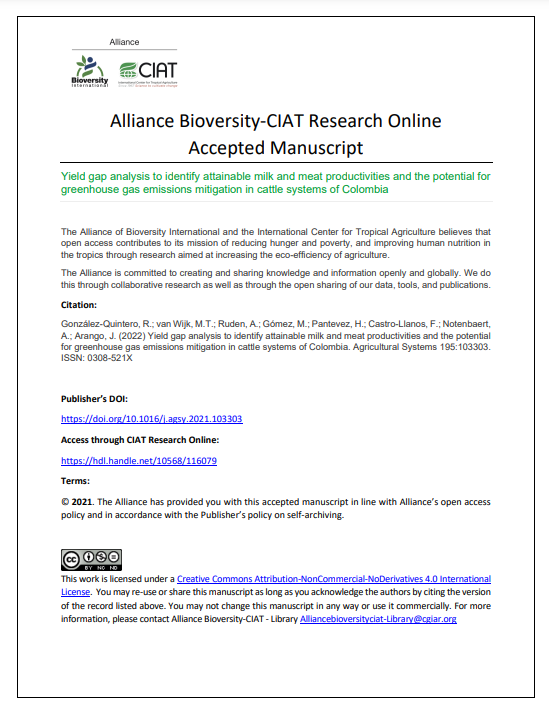 CONTEXT
Colombia has a total of 27.2 million heads of cattle, ranking fourth among the Latin American countries. Identifying sustainable strategies to mitigate greenhouse gas emissions (GHGE) will help the Colombian government meet their goal of a 51% reduction in national emissions by 2030. Estimation of yield gaps for identifying the potential to improve cattle farms productivity and efficiency in Colombia help on reducing the GHGE intensities from the cattle sector.

OBJECTIVE
This paper aims to calculate the gap between attainable and actual milk and meat yields for specialized dairy, dual-purpose, cow-calf, and fattening production systems in 3 agro-ecological zones (AEZ) in Colombia; to identify the main aspects that restrict the meat and milk yields in these production systems; and analyze how closing yield gaps affect the carbon footprint (CF) of meat and milk production.

METHODS
The most suitable AEZs for cattle activities were identified by considering environmental, climatic, edaphic, and land characteristics. From a dataset of 1505 surveyed farms, a yield gap benchmarking analysis for estimating the potential to increase meat and milk yields in each of the identified AEZ was applied. The most productive farms were included in the “best farms” while the rest of the farms belonged to the “farms operating below potential”. A “cradle to farm-gate” Life Cycle Assessment was used to calculate the CF. Three scenarios were proposed for closing the yield gaps by 50, 75, and 100%, between the two groups of farms.

RESULTS AND CONCLUSIONS
Three AEZs likely to support cattle activities in Colombia were identified. Average milk production from the farms operating below potential was 45–50% of potential production, and meat was 34–51%, indicating that a potential to achieve increases in milk and meat productivity exists. CFs of 1 kg milk or meat were lower in the groups of best-performing farms than in the groups of farms operating below potential. Yield gaps for milk and meat production can be closed by improving cattle management practices and better technologies. As a general trend, closing the yield gaps decreases the CFs.

SIGNIFICANCE
Our findings contribute to understand the farms’ current productive performance and provides key insights into the possible technological and managerial changes for improving the productivity of cattle systems in Colombia. In addition, the study showed how milk and meat CFs can be lowered with the adoption of proper cattle management practices, and better technologies.