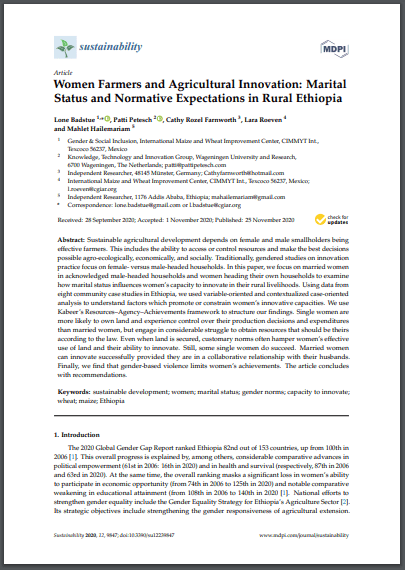 Sustainable agricultural development depends on female and male smallholders being effective farmers. This includes the ability to access or control resources and make the best decisions possible agro-ecologically, economically, and socially. Traditionally, gendered studies on innovation practice focus on female-versus male-headed households. In this paper, we focus on married women in acknowledged male-headed households and women heading their own households to examine how marital status influences women’s capacity to innovate in their rural livelihoods. Using data from eight community case studies in Ethiopia, we used variable-oriented and contextualized case-oriented analysis to understand factors which promote or constrain women’s innovative capacities. We use Kabeer’s Resources–Agency–Achievements framework to structure our findings. Single women are more likely to own land and experience control over their production decisions and expenditures than married women, but engage in considerable struggle to obtain resources that should be theirs according to the law. Even when land is secured, customary norms often hamper women’s effective use of land and their ability to innovate. Still, some single women do succeed. Married women can innovate successfully provided they are in a collaborative relationship with their husbands. Finally, we find that gender-based violence limits women’s achievements. The article concludes with recommendations.