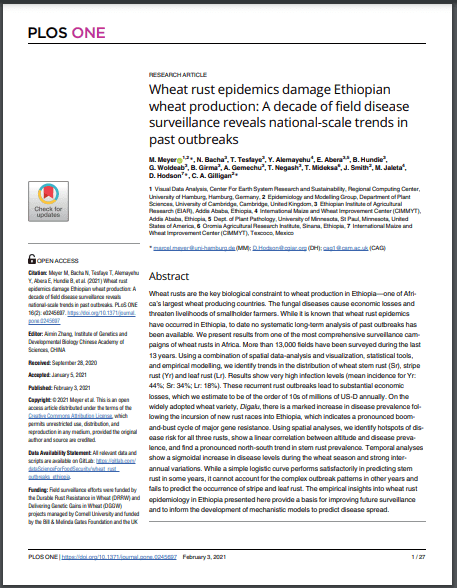 Wheat rusts are the key biological constraint to wheat production in Ethiopia—one of Africa’s largest wheat producing countries. The fungal diseases cause economic losses and threaten livelihoods of smallholder farmers. While it is known that wheat rust epidemics have occurred in Ethiopia, to date no systematic long-term analysis of past outbreaks has been available. We present results from one of the most comprehensive surveillance campaigns of wheat rusts in Africa. More than 13,000 fields have been surveyed during the last 13 years. Using a combination of spatial data-analysis and visualization, statistical tools, and empirical modelling, we identify trends in the distribution of wheat stem rust (Sr), stripe rust (Yr) and leaf rust (Lr). Results show very high infection levels (mean incidence for Yr: 44%; Sr: 34%; Lr: 18%). These recurrent rust outbreaks lead to substantial economic losses, which we estimate to be of the order of 10s of millions of US-D annually. On the widely adopted wheat variety, Digalu, there is a marked increase in disease prevalence following the incursion of new rust races into Ethiopia, which indicates a pronounced boom- and-bust cycle of major gene resistance. Using spatial analyses, we identify hotspots of disease risk for all three rusts, show a linear correlation between altitude and disease prevalence, and find a pronounced north-south trend in stem rust prevalence. Temporal analyses show a sigmoidal increase in disease levels during the wheat season and strong interannual variations. While a simple logistic curve performs satisfactorily in predicting stem rust in some years, it cannot account for the complex outbreak patterns in other years and fails to predict the occurrence of stripe and leaf rust. The empirical insights into wheat rust epidemiology in Ethiopia presented here provide a basis for improving future surveillance and to inform the development of mechanistic models to predict disease spread.