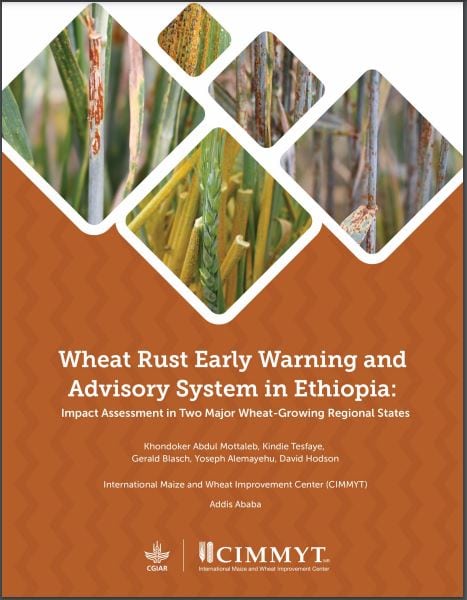 Wheat rusts are the main biotic factors affecting wheat yield in Ethiopia. In 2010, a yellow rust outbreak affected more than 38% (600,000 ha) of Ethiopia’s total 1.6 million ha wheat-growing area and reduced wheat production by 15–20%. Since 2015, the University of Cambridge, the U.K. Met Office, the Ethiopian Institute of Agriculture Research (EIAR), the Ethiopian Agricultural Transformation Agency (ATA), and the International Maize and Wheat Improvement Center (CIMMYT) have piloted, developed, and deployed a wheat rust early warning and advisory system (EWAS) in Ethiopia. The system provides an automated 7-day advance forecast about the possible outbreak of rust. The wheat rust EWAS has been operational for over four years in Ethiopia since its piloting. It has provided early warnings of rust and advisories to hundreds of thousands of wheat farmers through the Ministry of Agriculture, the ATA, Regional Bureaus of Agriculture, and extension services. Although it is challenging to separate the impacts of the EWAS completely from the impacts arising from broader ongoing efforts around wheat rust control in Ethiopia, this study provides strong indications that there has been a positive benefit from the wheat rust EWAS.