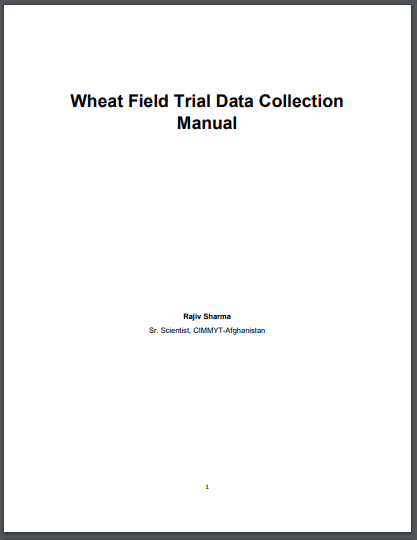 Wheat is synonym to food in Afghanistan. The per capita consumption of wheat at about 250 Kg annually  in Afghanistan is among the highest in the world. However, country lacks a delivering wheat R&D system as all wheat varieties have been introduced from outside and wheat seed replacement rate at about 5% is one of the lowest in the world. There is need to strengthen whet R&D to boost wheat production in the country. This manual is designed and intended for wheat researchers who are conducting wheat experiments and collecting data on relevant parameters that have been illustrated visually to facilitate smooth and timely collection of data. These parameters are studied in the applied wheat research that fall under the two categories such as qualitative traits and quantitative traits respectively. The major difference between the two types is that while most qualitative traits are of yes or no type or display discontinuous variation, the quantitative traits on the other hand require measurements and display continuous variation. Since applied wheat research needs to be conducted at several locations and several investigators are involved therefore, it becomes imperative that a common or same observation and measurement protocols are adopted in recording the trial data for arriving at valid interpretations