Wheat consumption dynamics in selected countries in Asia and Africa: implications for wheat supply by 2030 and 2050 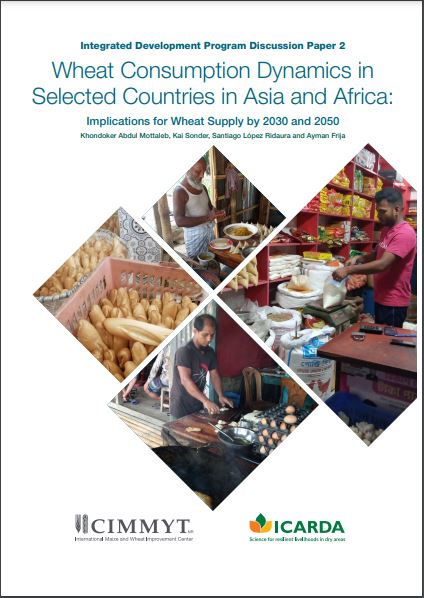 Since its earliest cultivation some 10,000 years ago, wheat has played a fundamental role in ensuring global food security and continues to do so as the most widely cultivated crop in the world and the second-most consumed staple after rice. Applying the time series econometric estimation procedure, this study projected demand for wheat in seven rapidly emerging countries of Africa and Asia—Bangladesh, China, Ethiopia, India, Kenya, Nepal, and Pakistan—in 2030 and 2050. In projecting wheat demand, this study has considered changes in demography, per capita GDP, and urbanization, as well as wheat production and imports in the sampled countries. There are compelling reasons to examine the future demand for wheat in emerging economies. It is projected that by 2050, the total global population is expected to reach between 8.9-10.6 billion (United Nations, 2019) compared with a global population of 7.8 billion in 2020 (World Bank, 2021a). Projections also show that by 2050, 68% of the global population will reside in urban areas compared with 56% in 2020 (World Bank, 2021a). The average per capita GDP at the constant price of 2010 is also projected to increase from 11,057 in 2019 (World Bank, 2021a) to 13,616 in 2032 (USDA, 2021). It is universally understood that with increases in income and urbanization as well as a lifestyle change, the dietary intake patterns of a nation typically evolve toward higher-value foods. The implications of dietary transitions on the future demand for wheat in the global south merits study. For some, expected transitions towards higher-value food have substantiated policy suggestions for reduced investment in the research and development of major cereals. However, rapidly emerging economies in the global south are characterized by extreme poverty, with large swaths of their poorest reliant on cereals such as wheat, maize, and rice for their daily dietary energy intake. The critical importance of wheat in the context of predicted economic growth and demographic change highlights the need for understanding the future role of wheat in emerging countries, thus allowing for effective prioritization of public and global R&D investments in this sector. Through the application of a simple time-series analysis method, this study demonstrated that wheat will continue to play a fundamental role in the diets of the sampled seven economically emerging developing countries. By 2030 and 2050, all sampled countries will face increases in yearly per capita wheat consumption. Populations and urbanization in the sampled countries are expected to increase significantly and many inhabitants will continue to face extreme poverty and rely heavily on staple cereals for their dietary energy. The study thus generates evidence for the need for continued support and investment in major cereals to ensure future food security in economically emerging developing countries.