Wheat blast: a disease spreading by intercontinental jumps and its management strategies 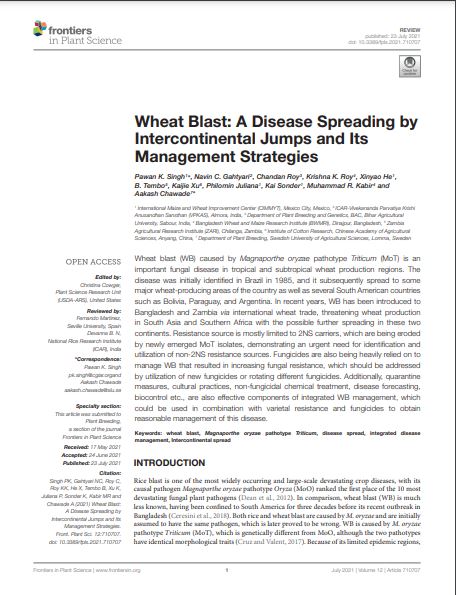 Wheat blast (WB) caused by Magnaporthe oryzae pathotype Triticum (MoT) is an important fungal disease in tropical and subtropical wheat production regions. The disease was initially identified in Brazil in 1985, and it subsequently spread to some major wheat-producing areas of the country as well as several South American countries such as Bolivia, Paraguay, and Argentina. In recent years, WB has been introduced to Bangladesh and Zambia via international wheat trade, threatening wheat production in South Asia and Southern Africa with the possible further spreading in these two continents. Resistance source is mostly limited to 2NS carriers, which are being eroded by newly emerged MoT isolates, demonstrating an urgent need for identification and utilization of non-2NS resistance sources. Fungicides are also being heavily relied on to manage WB that resulted in increasing fungal resistance, which should be addressed by utilization of new fungicides or rotating different fungicides. Additionally, quarantine measures, cultural practices, non-fungicidal chemical treatment, disease forecasting, biocontrol etc., are also effective components of integrated WB management, which could be used in combination with varietal resistance and fungicides to obtain reasonable management of this disease.