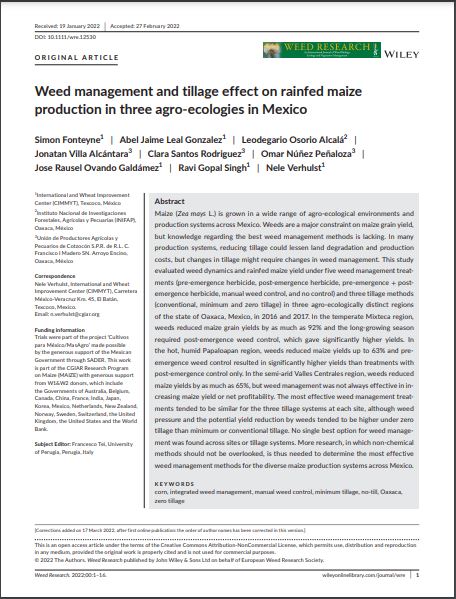 Maize (Zea mays L.) is grown in a wide range of agro-ecological environments and production systems across Mexico. Weeds are a major constraint on maize grain yield, but knowledge regarding the best weed management methods is lacking. In many production systems, reducing tillage could lessen land degradation and production costs, but changes in tillage might require changes in weed management. This study evaluated weed dynamics and rainfed maize yield under five weed management treatments (pre-emergence herbicide, post-emergence herbicide, pre-emergence + post-emergence herbicide, manual weed control, and no control) and three tillage methods (conventional, minimum and zero tillage) in three agro-ecologically distinct regions of the state of Oaxaca, Mexico, in 2016 and 2017. In the temperate Mixteca region, weeds reduced maize grain yields by as much as 92% and the long-growing season required post-emergence weed control, which gave significantly higher yields. In the hot, humid Papaloapan region, weeds reduced maize yields up to 63% and pre-emergence weed control resulted in significantly higher yields than treatments with post-emergence control only. In the semi-arid Valles Centrales region, weeds reduced maize yields by as much as 65%, but weed management was not always effective in increasing maize yield or net profitability. The most effective weed management treatments tended to be similar for the three tillage systems at each site, although weed pressure and the potential yield reduction by weeds tended to be higher under zero tillage than minimum or conventional tillage. No single best option for weed management was found across sites or tillage systems. More research, in which non-chemical methods should not be overlooked, is thus needed to determine the most effective weed management methods for the diverse maize production systems across Mexico.