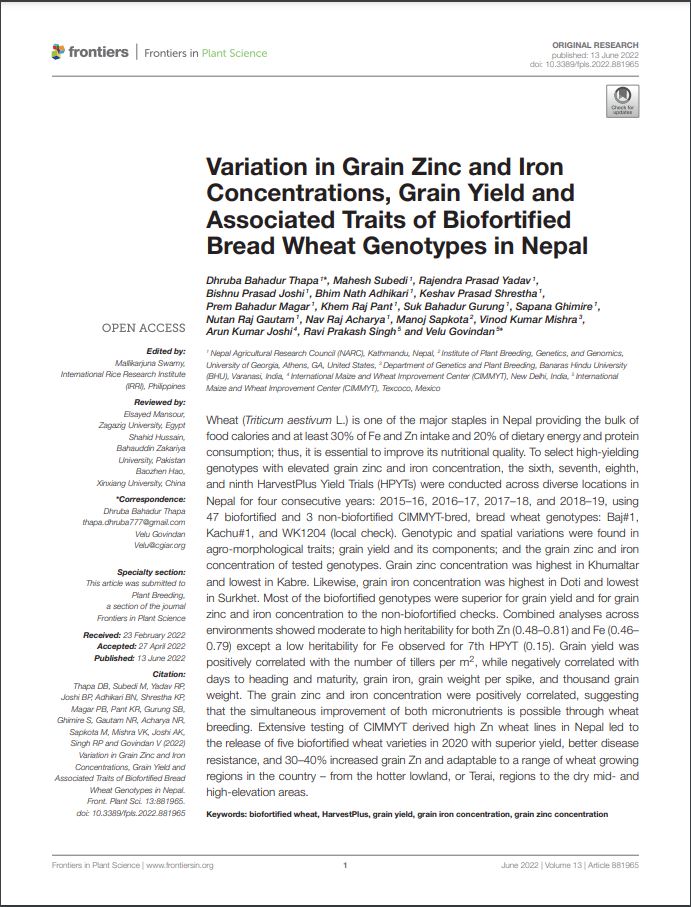 Wheat (Triticum aestivum L.) is one of the major staples in Nepal providing the bulk of food calories and at least 30% of Fe and Zn intake and 20% of dietary energy and protein consumption; thus, it is essential to improve its nutritional quality. To select high-yielding genotypes with elevated grain zinc and iron concentration, the sixth, seventh, eighth, and ninth HarvestPlus Yield Trials (HPYTs) were conducted across diverse locations in Nepal for four consecutive years: 2015–16, 2016–17, 2017–18, and 2018–19, using 47 biofortified and 3 non-biofortified CIMMYT-bred, bread wheat genotypes: Baj#1, Kachu#1, and WK1204 (local check). Genotypic and spatial variations were found in agro-morphological traits; grain yield and its components; and the grain zinc and iron concentration of tested genotypes. Grain zinc concentration was highest in Khumaltar and lowest in Kabre. Likewise, grain iron concentration was highest in Doti and lowest in Surkhet. Most of the biofortified genotypes were superior for grain yield and for grain zinc and iron concentration to the non-biofortified checks. Combined analyses across environments showed moderate to high heritability for both Zn (0.48–0.81) and Fe (0.46–0.79) except a low heritability for Fe observed for 7th HPYT (0.15). Grain yield was positively correlated with the number of tillers per m2, while negatively correlated with days to heading and maturity, grain iron, grain weight per spike, and thousand grain weight. The grain zinc and iron concentration were positively correlated, suggesting that the simultaneous improvement of both micronutrients is possible through wheat breeding. Extensive testing of CIMMYT derived high Zn wheat lines in Nepal led to the release of five biofortified wheat varieties in 2020 with superior yield, better disease resistance, and 30–40% increased grain Zn and adaptable to a range of wheat growing regions in the country – from the hotter lowland, or Terai, regions to the dry mid- and high-elevation areas.