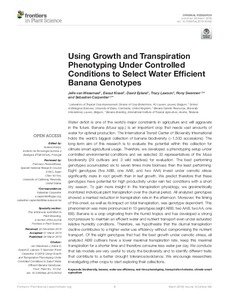 Using growth and transpiration phenotyping under controlled conditions to select water efficient banana genotypes
van Wesemael, J.; Kissel, E.; Eyland, D.; Lawson, T.; Swennen, R.; Carpentier, S.C.
Water deficit is one of the world’s major constraints in agriculture and will aggravate in the future. Banana (Musa spp.) is an important crop that needs vast amounts of water for optimal production. The International Transit Center of Bioversity International holds the world’s biggest collection of banana biodiversity (>1,500 accessions). The long-term aim of this research is to evaluate the potential within this collection for climate smart agricultural usage. Therefore, we developed a phenotyping setup under controlled environmental conditions and we selected 32 representatives of the Musa biodiversity (29 cultivars and 3 wild relatives) for evaluation. The best performing genotypes accumulated six to seven times more biomass than the least performing. Eight genotypes (five ABB, one AAB, and two AAA) invest under osmotic stress significantly more in root growth than in leaf growth. We predict therefore that these genotypes have potential for high productivity under rain fed conditions with a short dry season. To gain more insight in the transpiration physiology, we gravimetrically monitored individual plant transpiration over the diurnal period. All analyzed genotypes showed a marked reduction in transpiration rate in the afternoon. Moreover, the timing of this onset, as well as its impact on total transpiration, was genotype dependent. This phenomenon was more pronounced in 13 genotypes (eight ABB, two AAB, two AA, one BB). Banana is a crop originating from the humid tropics and has developed a strong root pressure to maintain an efficient water and nutrient transport even under saturated relative humidity conditions. Therefore, we hypothesize that the diurnal transpiration decline contributes to a higher water use efficiency without compromising the nutrient transport. Of the eight genotypes that had the best growth under osmotic stress, all analyzed ABB cultivars have a lower maximal transpiration rate, keep this maximal transpiration for a shorter time and therefore consume less water per day. We conclude that lab models are very useful to study the biodiversity and to identify different traits that contribute to a better drought tolerance/avoidance. We encourage researchers investigating other crops to start exploring their collections.
Open Access Journal