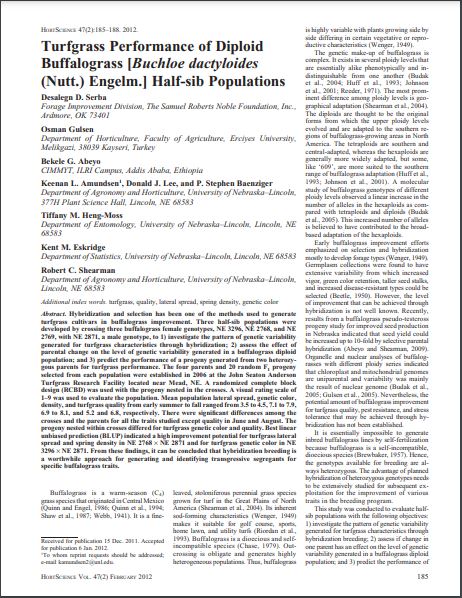 Hybridization and selection has been one of the methods used to generate turf grass cultivars in buffalo grass improvement. Three half-sib populations were developed by crossing three buffalo grass female genotypes, NE 3296, NE 2768, and NE 2769, with NE 2871, a male genotype, to 1) investigate the pattern of genetic variability generated for turf grass characteristics through hybridization; 2) assess the effect of parental change on the level of genetic variability generated in a buffalo grass diploid population; and 3) predict the performance of a progeny generated from two heterozygous parents for turf grass performance. The four parents and 20 random F1 progeny selected from each population were established in 2006 at the John Seaton Anderson Turf grass Research Facility located near Mead, NE. A randomized complete block design (RCBD) was used with the progeny nested in the crosses. A visual rating scale of 1-9 was used to evaluate the population. Mean population lateral spread, genetic color, density, and turf grass quality from early summer to fall ranged from 3.5 to 4.5, 7.1 to 7.9, 6.9 to 8.1, and 5.2 and 6.8, respectively. There were significant differences among the crosses and the parents for all the traits studied except quality in June and August. The progeny nested within crosses differed for turf grass genetic color and quality. Best linear unbiased prediction (BLUP) indicated a high improvement potential for turf grass lateral spread and spring density in NE 2768 × NE 2871 and for turf grass genetic color in NE 3296 × NE 2871. From these findings, it can be concluded that hybridization breeding is a worthwhile approach for generating and identifying trans gressive segregants for specific buffalo grass traits.