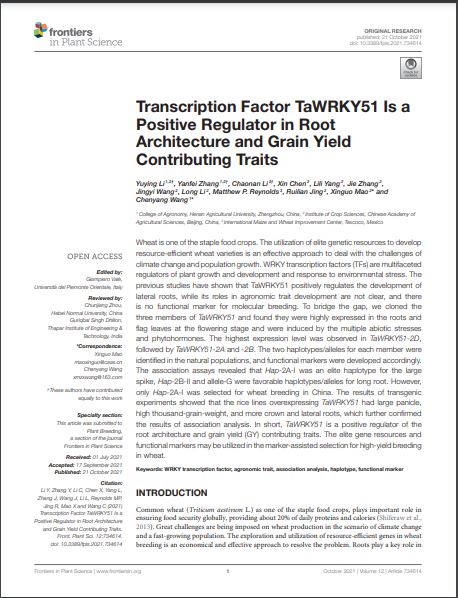 Wheat is one of the staple food crops. The utilization of elite genetic resources to develop resource-efficient wheat varieties is an effective approach to deal with the challenges of climate change and population growth. WRKY transcription factors (TFs) are multifaceted regulators of plant growth and development and response to environmental stress. The previous studies have shown that TaWRKY51 positively regulates the development of lateral roots, while its roles in agronomic trait development are not clear, and there is no functional marker for molecular breeding. To bridge the gap, we cloned the three members of TaWRKY51 and found they were highly expressed in the roots and flag leaves at the flowering stage and were induced by the multiple abiotic stresses and phytohormones. The highest expression level was observed in TaWRKY51-2D, followed by TaWRKY51-2A and -2B. The two haplotypes/alleles for each member were identified in the natural populations, and functional markers were developed accordingly. The association assays revealed that Hap-2A-I was an elite haplotype for the large spike, Hap-2B-II and allele-G were favorable haplotypes/alleles for long root. However, only Hap-2A-I was selected for wheat breeding in China. The results of transgenic experiments showed that the rice lines overexpressing TaWRKY51 had large panicle, high thousand-grain-weight, and more crown and lateral roots, which further confirmed the results of association analysis. In short, TaWRKY51 is a positive regulator of the root architecture and grain yield (GY) contributing traits. The elite gene resources and functional markers may be utilized in the marker-assisted selection for high-yield breeding in wheat.