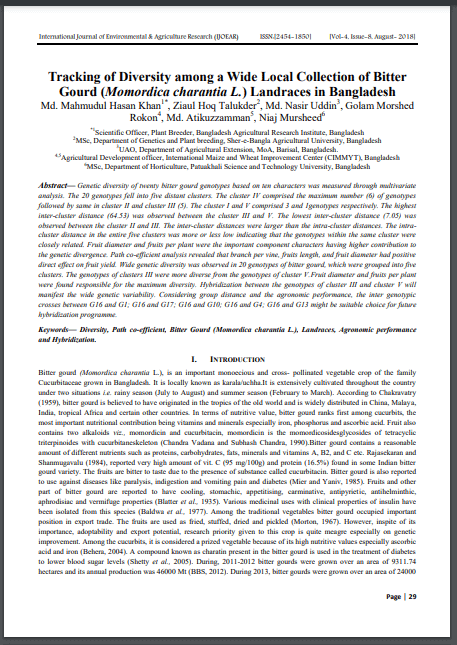 Genetic diversity of twenty bitter gourd genotypes based on ten characters was measured through multivariate analysis. The 20 genotypes fell into five distant clusters. The cluster IV comprised the maximum number (6) of genotypes followed by same in cluster II and cluster III (5). The cluster I and V comprised 3 and 1genotypes respectively. The highest inter-cluster distance (64.53) was observed between the cluster III and V. The lowest inter-cluster distance (7.05) was observed between the cluster II and III. The inter-cluster distances were larger than the intra-cluster distances. The intra-cluster distance in the entire five clusters was more or less low indicating that the genotypes within the same cluster were closely related. Fruit diameter and fruits per plant were the important component characters having higher contribution to the genetic divergence. Path co-efficient analysis revealed that branch per vine, fruits length, and fruit diameter had positive direct effect on fruit yield. Wide genetic diversity was observed in 20 genotypes of bitter gourd, which were grouped into five clusters. The genotypes of clusters III were more diverse from the genotypes of cluster V.Fruit diameter and fruits per plant were found responsible for the maximum diversity. Hybridization between the genotypes of cluster III and cluster V will manifest the wide genetic variability. Considering group distance and the agronomic performance, the inter genotypic crosses between G16 and G1; G16 and G17; G16 and G10; G16 and G4; G16 and G13 might be suitable choice for future hybridization programme.