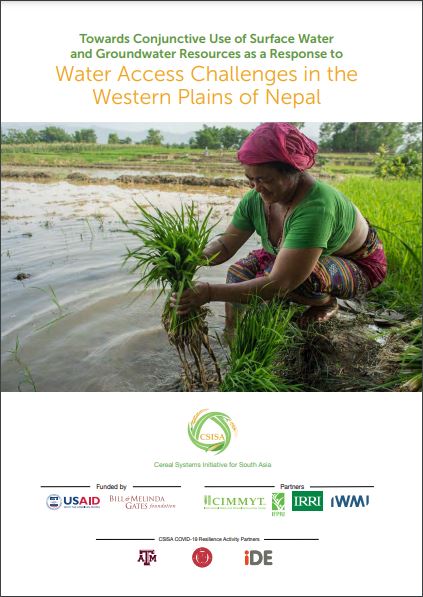 While food security in Nepal has improved in recent years, nearly 4.6 million people remain food insecure. Inadequate access to irrigation results in sub-optimal land and water productivities that pose key constrains to improving farmers’ livelihood and food security. At present, only 48% of the net cultivated area in Nepal has irrigation of some kind, however, only 39% of cultivated area has year-round-irrigation (YRI). However, due to unreliability of supply and/or high operational costs, even areas recorded under irrigation coverage have access to limited water. Though it may not be feasible to bring all arable land under irrigation for various reasons such as non-viability of irrigated area expansion for field crops in much of Nepal’s hills, groundwater resources in alluvial aquifers in the Terai, which are underdeveloped and can – if carefully planned and implemented – be utilized for expanding irrigation coverage. Emerging evidence also indicates that the percentage of irrigated area could be substantially increased, especially with groundwater or conjunctive use (CU) of groundwater and surface water. Conjunctive use is already practiced in many irrigation command areas, in part because of poor maintenance and unreliable supply of surface water schemes that have caused farmers to supplement surface water with groundwater. Nonetheless, initial estimates suggest that roughly 88% of the groundwater that could be abstracted on a sustainable basis in Nepal is yet to be utilized. Under such circumstances, expanding CU approaches has some potential to improve access to reliable irrigation. This could lead to productivity enhancements of land and water resources while provding a practical pathway for improving livelihoods and food security. As such, CU can be considered as an option to get the most out of existing surface water infrastructure, while recognizing that meaningful expansion of surface water use with the construction of new canals and canal structures is unlikely due to very high investment costs and questionable performance in terms of reliable acess to water in many existing surface water schemes. To assess its prospects, CU planning requires, a detailed understanding of the availability and spatio-temporal distribution of surface water and groundwater resources, and multi-sectoral water demands. This study considers six Terai districts within the Feed the Future Zone of Influence (FtF-ZoI) in Western Nepal as study area. We aim to answer the following research questions by means of a thorough review of available literature to provide inputs for developing a sustainable framework for irrigation development considering – i) What are the estimates on current and future water availability in the FtF-ZoI? ii) What are estimates on current and future water demand? iii) What are prospects and potential strategies for planned CU in the FtF-ZoI (Terai districts)? This research is part of a larger effort to develop a framework for sustainable irrigation development in the FtF-ZoI considering biophysical issues as ell as socioeconomic, policy, and institutional concerns, complemented by futuristic scenario modeling of irrigation development options. This document therefore informs these efforts and provides guidance on key hydrological concerns pertaining to irrigation development. A summary of key findings from the current documents on various dimensions that indicates prospects for conjunctive use (CU) planning in the FtF-ZoI region (Terai districts) is provided hereunder.