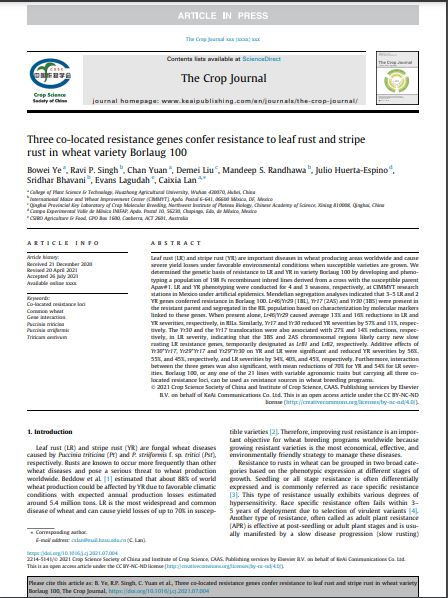 Leaf rust (LR) and stripe rust (YR) are important diseases in wheat producing areas worldwide and cause severe yield losses under favorable environmental conditions when susceptible varieties are grown. We determined the genetic basis of resistance to LR and YR in variety Borlaug 100 by developing and phenotyping a population of 198 F6 recombinant inbred lines derived from a cross with the susceptible parent Apav#1. LR and YR phenotyping were conducted for 4 and 3 seasons, respectively, at CIMMYT research stations in Mexico under artificial epidemics. Mendelian segregation analyses indicated that 3–5 LR and 2 YR genes conferred resistance in Borlaug 100. Lr46/Yr29 (1BL), Yr17 (2AS) and Yr30 (3BS) were present in the resistant parent and segregated in the RIL population based on characterization by molecular markers linked to these genes. When present alone, Lr46/Yr29 caused average 13% and 16% reductions in LR and YR severities, respectively, in RILs. Similarly, Yr17 and Yr30 reduced YR severities by 57% and 11%, respectively. The Yr30 and the Yr17 translocation were also associated with 27% and 14% reductions, respectively, in LR severity, indicating that the 3BS and 2AS chromosomal regions likely carry new slow rusting LR resistance genes, temporarily designated as LrB1 and LrB2, respectively. Additive effects of Yr30*Yr17, Yr29*Yr17 and Yr29*Yr30 on YR and LR were significant and reduced YR severities by 56%, 55%, and 45%, respectively, and LR severities by 34%, 40%, and 45%, respectively. Furthermore, interaction between the three genes was also significant, with mean reductions of 70% for YR and 54% for LR severities. Borlaug 100, or any one of the 21 lines with variable agronomic traits but carrying all three co-located resistance loci, can be used as resistance sources in wheat breeding programs.