The importance of the traditional milpa in food security and nutritional self-sufficiency in the highlands of Oaxaca, Mexico 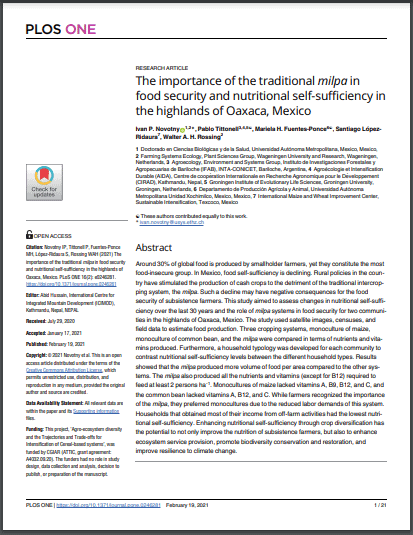 Around 30% of global food is produced by smallholder farmers, yet they constitute the most food-insecure group. In Mexico, food self-sufficiency is declining. Rural policies in the country have stimulated the production of cash crops to the detriment of the traditional intercropping system, the milpa. Such a decline may have negative consequences for the food security of subsistence farmers. This study aimed to assess changes in nutritional self-sufficiency over the last 30 years and the role of milpa systems in food security for two communities in the highlands of Oaxaca, Mexico. The study used satellite images, censuses, and field data to estimate food production. Three cropping systems, monoculture of maize, monoculture of common bean, and the milpa were compared in terms of nutrients and vitamins produced. Furthermore, a household typology was developed for each community to contrast nutritional self-sufficiency levels between the different household types. Results showed that the milpa produced more volume of food per area compared to the other systems. The milpa also produced all the nutrients and vitamins (except for B12) required to feed at least 2 persons ha-1. Monocultures of maize lacked vitamins A, B9, B12, and C, and the common bean lacked vitamins A, B12, and C. While farmers recognized the importance of the milpa, they preferred monocultures due to the reduced labor demands of this system. Households that obtained most of their income from off-farm activities had the lowest nutritional self-sufficiency. Enhancing nutritional self-sufficiency through crop diversification has the potential to not only improve the nutrition of subsistence farmers, but also to enhance ecosystem service provision, promote biodiversity conservation and restoration, and improve resilience to climate change.