The impact of adopting stress-tolerant maize on maize yield, maize income, and food security in Tanzania 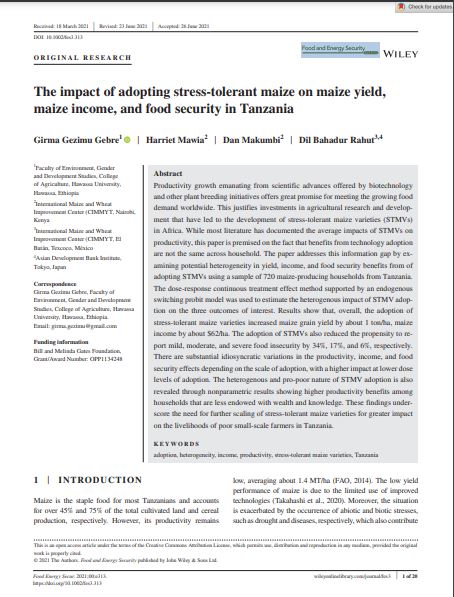 Productivity growth emanating from scientific advances offered by biotechnology and other plant breeding initiatives offers great promise for meeting the growing food demand worldwide. This justifies investments in agricultural research and development that have led to the development of stress-tolerant maize varieties (STMVs) in Africa. While most literature has documented the average impacts of STMVs on productivity, this paper is premised on the fact that benefits from technology adoption are not the same across household. The paper addresses this information gap by examining potential heterogeneity in yield, income, and food security benefits from of adopting STMVs using a sample of 720 maize-producing households from Tanzania. The dose-response continuous treatment effect method supported by an endogenous switching probit model was used to estimate the heterogenous impact of STMV adoption on the three outcomes of interest. Results show that, overall, the adoption of stress-tolerant maize varieties increased maize grain yield by about 1 ton/ha, maize income by about $62/ha. The adoption of STMVs also reduced the propensity to report mild, moderate, and severe food insecurity by 34%, 17%, and 6%, respectively. There are substantial idiosyncratic variations in the productivity, income, and food security effects depending on the scale of adoption, with a higher impact at lower dose levels of adoption. The heterogenous and pro-poor nature of STMV adoption is also revealed through nonparametric results showing higher productivity benefits among households that are less endowed with wealth and knowledge. These findings underscore the need for further scaling of stress-tolerant maize varieties for greater impact on the livelihoods of poor small-scale farmers in Tanzania.