The geography of agricultural input markets in rural Tanzania 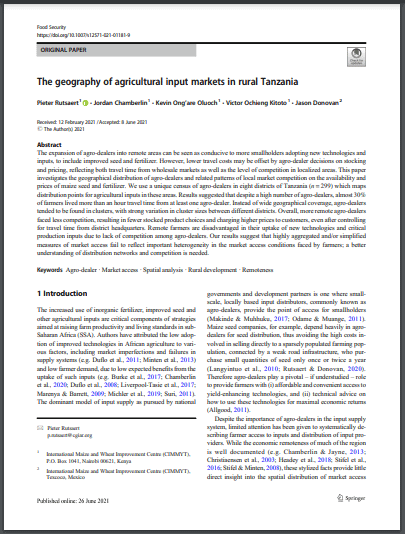 The expansion of agro-dealers into remote areas can be seen as conducive to more smallholders adopting new technologies and inputs, to include improved seed and fertilizer. However, lower travel costs may be offset by agro-dealer decisions on stocking and pricing, reflecting both travel time from wholesale markets as well as the level of competition in localized areas. This paper investigates the geographical distribution of agro-dealers and related patterns of local market competition on the availability and prices of maize seed and fertilizer. We use a unique census of agro-dealers in eight districts of Tanzania (n = 299) which maps distribution points for agricultural inputs in these areas. Results suggested that despite a high number of agro-dealers, almost 30% of farmers lived more than an hour travel time from at least one agro-dealer. Instead of wide geographical coverage, agro-dealers tended to be found in clusters, with strong variation in cluster sizes between different districts. Overall, more remote agro-dealers faced less competition, resulting in fewer stocked product choices and charging higher prices to customers, even after controlling for travel time from district headquarters. Remote farmers are disadvantaged in their uptake of new technologies and critical production inputs due to lack of competition among agro-dealers. Our results suggest that highly aggregated and/or simplified measures of market access fail to reflect important heterogeneity in the market access conditions faced by farmers; a better understanding of distribution networks and competition is needed.