The context of REDD+ in Myanmar: Drivers, agents and institutions 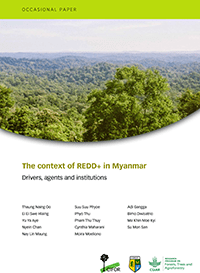 The Republic of the Union of Myanmar is a forest resource-rich country, but is also facing serious deforestation and forest degradation problems. Currently, Myanmar’s forest still covers more than 40% of the country’s land area (Aung (2001) but 70% of its population live in rural areas, and the agricultural sector is the main contributor to the country’s gross domestic product (GDP) (30%) (World Bank 2014). The country faces the all-too-common dilemma of how to develop its economy while at the same time curbing environmental degradation and contributing to carbon emissions reduction. In 2013, Myanmar adopted a REDD+ program and started its preparatory phase. Myanmar established and developed its National Forest Monitoring System (NFMS) and Reference Emission Levels (RELs) for REDD+ following the guidance and modalities set out by the United Nations Framework Convention on Climate Change (UNFCCC). Implementing REDD+ requires political commitment to address direct and indirect drivers of deforestation, an adequate funding mechanism that is based on a thorough analysis of all costs and benefits, a transparent and equitable benefit-sharing mechanism, and a participatory decision-making approach in which all stakeholders can take part in REDD+. The Global Comparative Study on REDD+, together with its country partners, is compiling profiles of 14 countries to better understand the socioeconomic contexts in which REDD+ policies and processes emerge.

The post The context of REDD+ in Myanmar: Drivers, agents and institutions appeared first on Center for International Forestry Research.