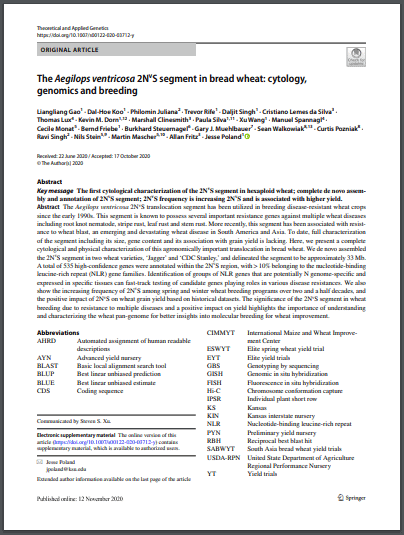 The Aegilops ventricosa 2NvS translocation segment has been utilized in breeding disease-resistant wheat crops since the early 1990s. This segment is known to possess several important resistance genes against multiple wheat diseases including root knot nematode, stripe rust, leaf rust and stem rust. More recently, this segment has been associated with resistance to wheat blast, an emerging and devastating wheat disease in South America and Asia. To date, full characterization of the segment including its size, gene content and its association with grain yield is lacking. Here, we present a complete cytological and physical characterization of this agronomically important translocation in bread wheat. We de novo assembled the 2NvS segment in two wheat varieties, ‘Jagger’ and ‘CDC Stanley,’ and delineated the segment to be approximately 33 Mb. A total of 535 high-confidence genes were annotated within the 2NvS region, with > 10% belonging to the nucleotide-binding leucine-rich repeat (NLR) gene families. Identification of groups of NLR genes that are potentially N genome-specific and expressed in specific tissues can fast-track testing of candidate genes playing roles in various disease resistances. We also show the increasing frequency of 2NvS among spring and winter wheat breeding programs over two and a half decades, and the positive impact of 2NvS on wheat grain yield based on historical datasets. The significance of the 2NvS segment in wheat breeding due to resistance to multiple diseases and a positive impact on yield highlights the importance of understanding and characterizing the wheat pan-genome for better insights into molecular breeding for wheat improvement.