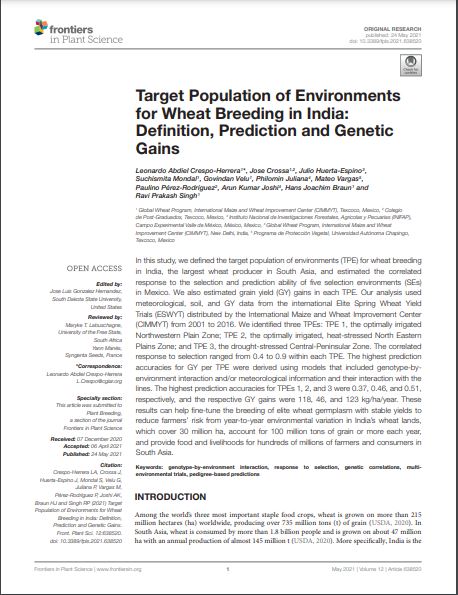 In this study, we defined the target population of environments (TPE) for wheat breeding in India, the largest wheat producer in South Asia, and estimated the correlated response to the selection and prediction ability of five selection environments (SEs) in Mexico. We also estimated grain yield (GY) gains in each TPE. Our analysis used meteorological, soil, and GY data from the international Elite Spring Wheat Yield Trials (ESWYT) distributed by the International Maize and Wheat Improvement Center (CIMMYT) from 2001 to 2016. We identified three TPEs: TPE 1, the optimally irrigated Northwestern Plain Zone; TPE 2, the optimally irrigated, heat-stressed North Eastern Plains Zone; and TPE 3, the drought-stressed Central-Peninsular Zone. The correlated response to selection ranged from 0.4 to 0.9 within each TPE. The highest prediction accuracies for GY per TPE were derived using models that included genotype-by-environment interaction and/or meteorological information and their interaction with the lines. The highest prediction accuracies for TPEs 1, 2, and 3 were 0.37, 0.46, and 0.51, respectively, and the respective GY gains were 118, 46, and 123 kg/ha/year. These results can help fine-tune the breeding of elite wheat germplasm with stable yields to reduce farmers’ risk from year-to-year environmental variation in India’s wheat lands, which cover 30 million ha, account for 100 million tons of grain or more each year, and provide food and livelihoods for hundreds of millions of farmers and consumers in South Asia.