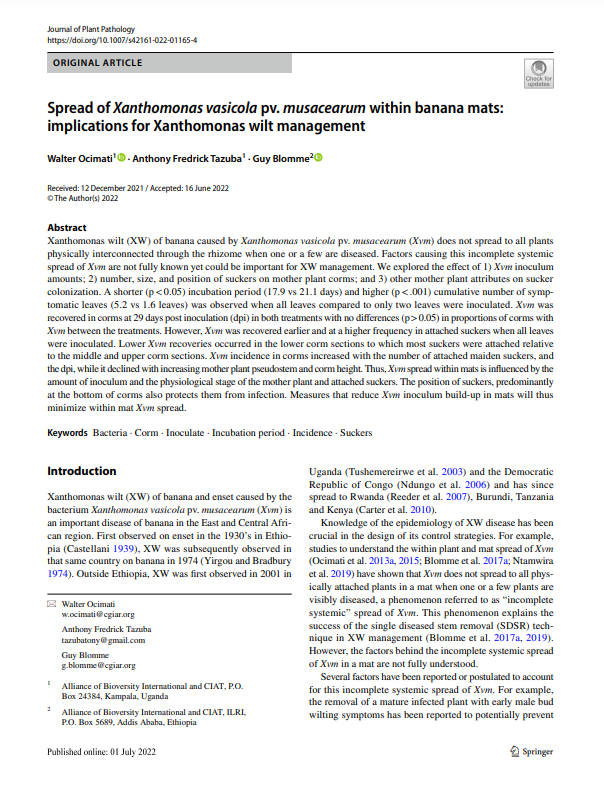 Xanthomonas wilt (XW) of banana caused by Xanthomonas vasicola pv. musacearum (Xvm) does not spread to all plants physically interconnected through the rhizome when one or a few are diseased. Factors causing this incomplete systemic spread of Xvm are not fully known yet could be important for XW management.

We explored the effect of 1) Xvm inoculum amounts; 2) number, size, and position of suckers on mother plant corms; and 3) other mother plant attributes on sucker colonization. A shorter (p < 0.05) incubation period (17.9 vs 21.1 days) and higher (p < .001) cumulative number of symptomatic leaves (5.2 vs 1.6 leaves) was observed when all leaves compared to only two leaves were inoculated. Xvm was recovered in corms at 29 days post inoculation (dpi) in both treatments with no differences (p > 0.05) in proportions of corms with Xvm between the treatments. However, Xvm was recovered earlier and at a higher frequency in attached suckers when all leaves were inoculated.

Lower Xvm recoveries occurred in the lower corm sections to which most suckers were attached relative to the middle and upper corm sections. Xvm incidence in corms increased with the number of attached maiden suckers, and the dpi, while it declined with increasing mother plant pseudostem and corm height. Thus, Xvm spread within mats is influenced by the amount of inoculum and the physiological stage of the mother plant and attached suckers. The position of suckers, predominantly at the bottom of corms also protects them from infection. Measures that reduce Xvm inoculum build-up in mats will thus minimize within mat Xvm spread.