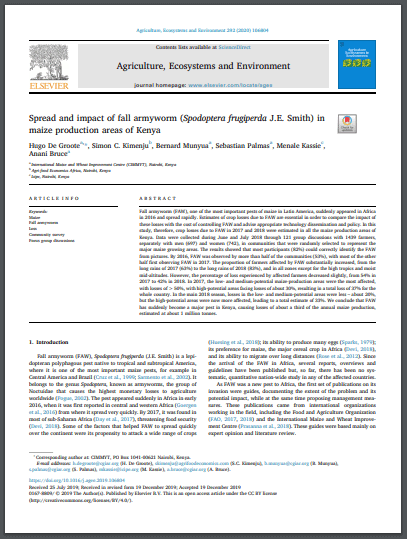 Fall armyworm (FAW), one of the most important pests of maize in Latin America, suddenly appeared in Africa in 2016 and spread rapidly. Estimates of crop losses due to FAW are essential in order to compare the impact of these losses with the cost of controlling FAW and advise appropriate technology dissemination and policy. In this study, therefore, crop losses due to FAW in 2017 and 2018 were estimated in all the maize production areas of Kenya. Data were collected during June and July 2018 through 121 group discussions with 1439 farmers, separately with men (697) and women (742), in communities that were randomly selected to represent the major maize growing areas. The results showed that most participants (82%) could correctly identify the FAW from pictures. By 2016, FAW was observed by more than half of the communities (53%), with most of the other half first observing FAW in 2017. The proportion of farmers affected by FAW substantially increased, from the long rains of 2017 (63%) to the long rains of 2018 (83%), and in all zones except for the high tropics and moist mid-altitudes. However, the percentage of loss experienced by affected farmers decreased slightly, from 54% in 2017 to 42% in 2018. In 2017, the low- and medium-potential maize-production areas were the most affected, with losses of >50%, with high-potential areas facing losses of about 30%, resulting in a total loss of 37% for the whole country. In the main 2018 season, losses in the low- and medium-potential areas were less ? about 20%, but the high-potential areas were now more affected, leading to a total estimate of 33%. We conclude that FAW has suddenly become a major pest in Kenya, causing losses of about a third of the annual maize production, estimated at about 1 million tonnes.